Canals are superb places for an angler to being fishing, as they usually offer offer cheap day-ticket fishing, are shallow close to the bank, and usually hold plenty of bold-biting fish. 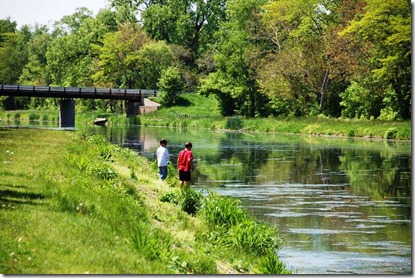 A beginner to the sport can go to his local canal with a tub of maggots and a short rod, and catch a netful of small gudgeon, roach and perch. This is great fun, but there are also plenty of big fish, such as carp, bream and chub, to be caught in canals these days, and a greater understanding of fish behavior will give you a much better chance of tempting these quality fish.

The great thing about canals from the angler’s point of view is that they are all quite similar in construction. Most have a deep boat-channel down the center with a shallower ledge on either side and a towpath on one bank.

Most fish, apart from eels, tend to prefer the shallow water to the deep channel, probably because they do not enjoy battling against the turbulence created every time a boat passes along the canal. A lot of small fish tend to gather on the near side of the canal but, not surprisingly, the older, wise , bigger fish move away from the busy towpath side into quieter water. Having moved to the far side, the fish then seek cover, away from people, predators, and the continual ebb and flow motion of the water, ad the canal locks are opened and closed.

One of the more effective canal fishing tips is for that the pleasure angler should fish from pegs from opposite far-bank features, such as reeds, bushes or overhanging branches.

Unfortunately, fish tend to hug these features very closely, so you often have to fish within inches of the obstruction to get a bite, and consistently casting a waggler float, or leger lead, with repetitive accuracy is next to impossible. That is why you often see anglers using long fishing poles on canals.

By fishing with a very small amount of line between the tip of the pole and the float, the long-pole angler can push his float and bait right up to the far bank without having to cast. Of course, most anglers do not possess a pole of 46 feet (14m), which is often needed for this method of fishing, so it may be necessary to consider other fish holding features. The angler should also take note of the other canal fishing tips.

Pegs on either side of canal bridges are very good, particularly those close to busy roads. Incidentally, the same is true of Fenland drains. It’s believed this is because the fish here have a safe haven from the current ornithological plague, as far as anglers are concerned – the cormorant. This super-efficient diving bird has devastated many fisheries, virtually wiping out stocks of small fish on some waters before moving on to others.

Fortunately, cormorants do not like bridges and, more particularly, they dislike busy roads, so small fish move to stretches of water near these features for safety. Incidentally, bridges are also a great place to locate pike because they follow the small fish as a ready supply of food.

Another feature to look out for on canals is boat turning bays, where the water widens out into a small lake. These areas are protected from the tow created by the opening and closing of locks, and so, they hold large shoals of lazy fish, such as bream, skimmers and tench.

Although there are many canals that hold double-figure weight carp these days, they are not generally the ideal venue to choose if you like catching specimen fish. However, there is an exception. Canals are known to hold some huge eels, and fish weighing more than 6lb are caught every season on small deadbaits.

What is more, only a few anglers bother to fish for them, because a specialist approach involving night fishing is required, so the reported catches are probably only a tiny indication of the number and size of eels that are present

Fishing Floats: What You Need To Know