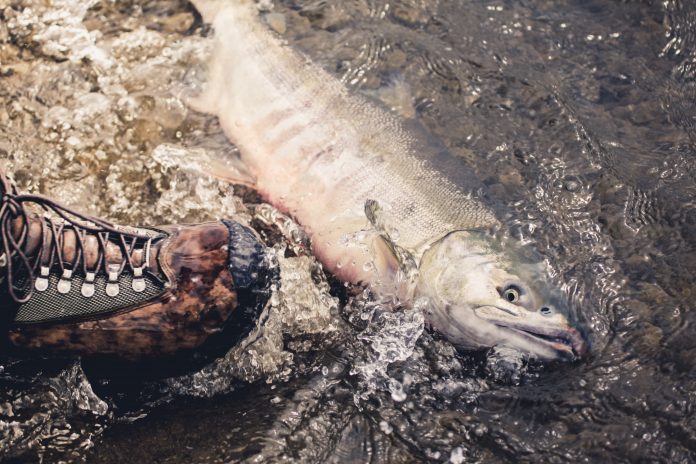 Foot fishing is practiced worldwide wherever the lower extremities can assist the upper ones, but it is especially popular in Europe. In the United Kingdom, keeping a place in place with one’s foot before it can be picked up by hand is known as “treading flukes.”

In France, this oft-practiced technique is called peche a pied. And on the East Frisian North Sea coast, the taking of turbot from pools that remain as the tide ebbs is named buttpetten.

A foot-fishing technique that is truly elegant in its simplicity is practiced in the Danish part of Vadehavet – the shallow waters on the west coast of Denmark, Germany, and the Netherlands. There, on low tide, fishermen walk the flats with no hope of catching flounder at that time. But they come back on the rising tide, stepping into their own footprints for flounder that have come to rest in those depressions.

Foot fishing for flatfish is simple. Wade slowly into a river inlet (See facts about rivers)  or shallow bay with bare feet. When your foot slides over a flounder, simply step down hard to pin it, then reach down and grab it and bag it. Sometimes distinct pools are worked together by a line of a half dozen people. Accomplished treaders can fill a sack this way, but it may not be for the ticklish.

Native Americans of the Pacific Northwest coast also foot-fished for partially buried flounder on mudflats or sandbars, but they used spears to secure the fish, as do the Welsh. In the Welsh technique, the barefoot fisherman works upcurrent, feeling for the flounder’s tail.

The flounder spooks and turns to escape downstream, giving a moment to strike – with luck in the fish’s tail and not in the spearer’s toes. Some English treaders also use spears. The fisherman feels the flounder with his bare foot, then reaches down and strokes his hand up the fish’s back before poking the spear through its head.

Feet may also be used for more typically shaped “roundfish.” In modern Egypt, fishermen use their toes and soles to feel for the spawning holes of tilapia. Once a hole is located, the foot fisher grabs the nest-guarding female by hand.

Even more esoteric is to walk on hard earth to find fish below. Lungfish burrow into the mud as their water dries up seasonally. But fishermen can locate them by stamping on the baked mud and then dig them out by hand or with hoes.