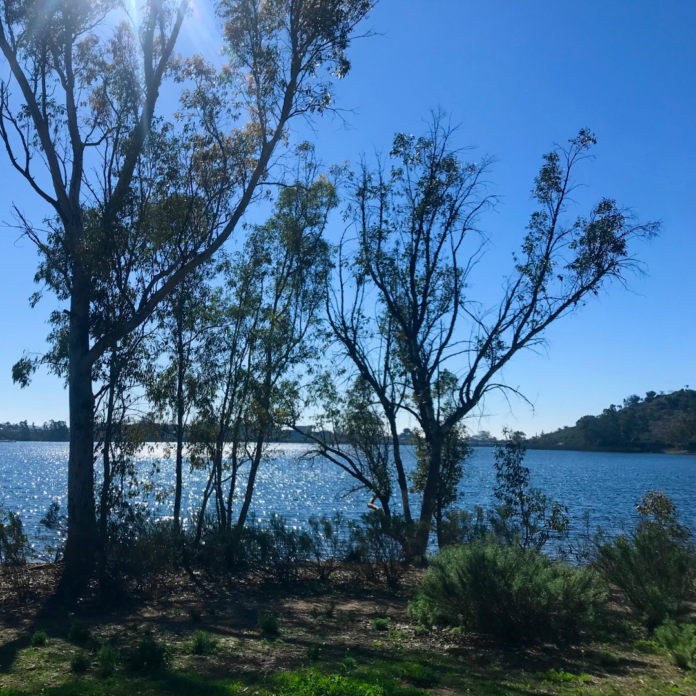 Legends of Lake Murray: The Murray is Australia’s biggest river, despite the fact that it’s a baby compared to the Nile, the Amazon, and countless European and Asian waterways. The Murray rises in the Snowy Mountains – also not particularly Earth-shattering as far as mountain ranges go – and then flows west and forms the border of New South Wales and Victoria. The Darling system comes down from Queensland and flows through the semi-arid bits of New South Wales – Brewarinna, Bourke, Wilcannia, Menindee – before joining the Murray at Wentworth.

The Murray–Darling Basin occasionally drains to the sea – just east of Adelaide in South Australia. But in dry years when water fails to make it to the river mouth there’s plenty of controversy regarding why there should be water in the lower reaches of the river. This is where political map lines (states) and science map lines (drainage basins) don’t line up, and it’s where the trouble starts, for this system covers parts of four states and includes the Australian Capital Territory: it doesn’t take Einstein to work out that if you live at the bottom of the Basin (South Australia) it’s likely that there’ll be less water than there is at the top (Queensland or the New South Wales highlands), because people need it for everything from growing food to generating electricity.

The Murray–Darling Basin (MDB) is particularly interesting from a social and economic point of view because it’s where much of Australia’s rural development has occurred, and also because it’s literally just over the hill (Great Dividing Range) from the east coast, which is where the vast majority of the population lives.

Consequently, the meat and grain and wine and fruit that Australians consume as they lazily watch the Pacific drift by is frequently grown on or in the soils within the Basin, and has been ever since Blaxland, Wentworth and Lawson first bush-bashed their way across Mount Victoria.

A great number of quintessentially Australian things therefore originate in or from this large area, from sheep grazing to cereal cropping to bushrangers, and in many cases when Australians think of the bush, they probably think of a romanticised bit of the MDB that includes a few sheep hanging around a section of river, the odd eucalypt, plenty of grass, a kookaburra in the eucalypt…you get the idea.

Beneath the thin veneer of loveliness and tranquillity, however, it’s become obvious that the Murray–Darling Basin is in poor environmental nick. So, along with all the happy rural connotations, it is now known as the spot where Minister Penny Wong bought an irrigation farm (Toorale) up near Bourke so that the water could go back to the river rather than into big storages; where the biggest irrigation property of them all, Cubbie, is almost always in the news; and where the conflicting interests and/or wobbly alliances of farmers, conservationists and governments become big, convoluted issues that seem to have no solution.

Way way back, of course, it wasn’t quite as complicated. About 500 000 years ago (give or take), a massive lake existed in south-eastern Australia. It was called Lake Bungunnia, and stretched from Menindee down to Mildura and then south and west nearly to Adelaide. Think of those big meandering red cliffs on the Murray down in South Australia and you’re in Bungunnia country. Back then, inland Australia was a lot wetter.

Lake Bungunnia was huge, and would have facilitated colonisation of most of the area covered by the current Murray–Darling Basin rivers by a common suite of fish species and other aquatic creatures like turtles and crayfish.

Consequently, with a few local variations, the native species we find today in the Murray we also find in the Murrumbidgee, the Lachlan, the Macquarie and so forth, and it’d be a fair bet that similar species swam about in Bungunnia.

We’re not entirely sure what happened between the heyday of Bungunnia and the present but there are a few clues. Our biggest mammals, such as diprotodons and giant kangaroos, became extinct at around the same time – give or take a few thousand years – as humans first moved to Australia.

It seems highly likely that the arrival of a new and efficient superomnivore might have heralded the beginning of the end of the megafauna, but it’s interesting that some of our more aridadapted large mammals, such as red and grey kangaroos, have hung on and either become or remained the dry-country specialists they are today.

Nevertheless, out-size goannas, pythons and land crocodiles drifted into extinction, so it’s tempting to think that, way back in the waters of Lake Bungunnia, there might have been mega-cod cruising the shallows searching for giant frogs, and whopping archerfish shooting down low-flying super bugs.

The point is, we don’t know how many species have become extinct from the suite of fauna that swam about in Lake Bungunnia, but you could put money on the fact that everything native that’s getting around the Murray–Darling now has a skerrick of Bungunnian ancestry.