Fun Facts about Rivers and Streams

In the simplest terms, the nature and characteristics of any stream or river are governed by the nature of the land over or through which its water flows. The species and quality of the fish it sustains on the other hand are governed by the nature and characteristics of the river. Small, infertile streams support small trout (or no fish at all). Larger, more fertile and well oxygenated rivers support larger trout and, quite often, grayling fish, dace fish, chub fish and pike. In their lower reaches, where they are sluggish, less well aerated and often prone to silting, rivers usually support coarse fish, rather than trout.

Almost all streams and rivers of any size change in character between their sources and their estuaries or the points at which they join other watercourses. Most obviously, the speed of the water drops and the size of a stream grows as the valley through which it flows flattens out and tributaries join it. But other, more complicated, factors have roles to play, too.

As water runs through or over rock, it absorbs dissolved mineral salts which fertilize it. The softer the rock, the more easily is it dissolved. This is more particular if the water spends a substantial period of time in contact with it. Chalk and, to a lesser extent, sandstone and limestone are soft and readily dissolved. Granite is hard and yields almost no salts at all. This is why chalk and limestone streams produce luxuriant weed growth and big trout. On the other hand, rivers running off granite mountains produce little weed and small trout. 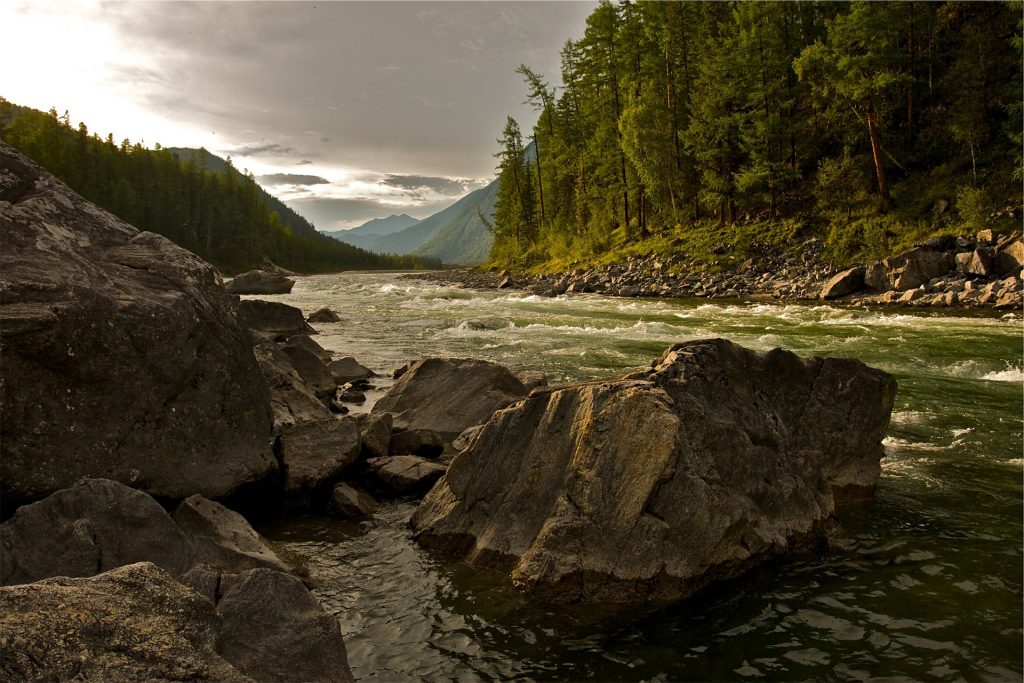 The vegetation in the water catchment areas can also significantly influence the nature of a stream. Where rainwater seeps into a watercourse through peat or through decaying bracken, heather or pine needles, the stream will usually have a brown tinge, often quite dark. This excludes light and thus inhibits weed growth and its water will be acid.

Rivers and Streams and Man

Man, that inveterate meddler, has also altered the characters of most of our rivers. In many areas, chemical fertilizers used for agricultural purposes are washed off the land or leach through it. It significantly increases the fertility of some rivers, often to their detriment. Weed choking a water-course benefits neither fish nor fisherman.

Some rivers have been dammed to form reservoirs from which water is drawn for domestic and industrial consumption. Such abstraction drastically reduces water levels below the dams. And, of course, dams of any sort can obstruct the passage of migratory fish. In contrast, relief channels designed to carry flood water away now contain the excesses of a few rivers. It reduces the levels to which they rise and helping to prevent them from breaking their banks.

And, lastly, man, of course, has developed an astonishing array of techniques for polluting rivers. Pollution de-oxygenates the water, killing fish and other animal life by suffocation, sometimes for very considerable distances downstream.

Indeed, some — especially on the chalk streams has greatly benefited the fish and, therefore, the angler. Hatches and weirs, usually (mill lot put poses other than simply to improve a fishery, oxygenate the water and encourage it to carve out deep pools, providing ideal holding areas for trout and grayling fish. Bridges provide shade and shelter, often otherwise lacking on some streams. This is why it always pays to approach them cautiously and fish them carefully.

The essential difference between a chalk stream or brook and other burns, becks and rivers lies in their respective sources and in the nature of the land over which they flow.