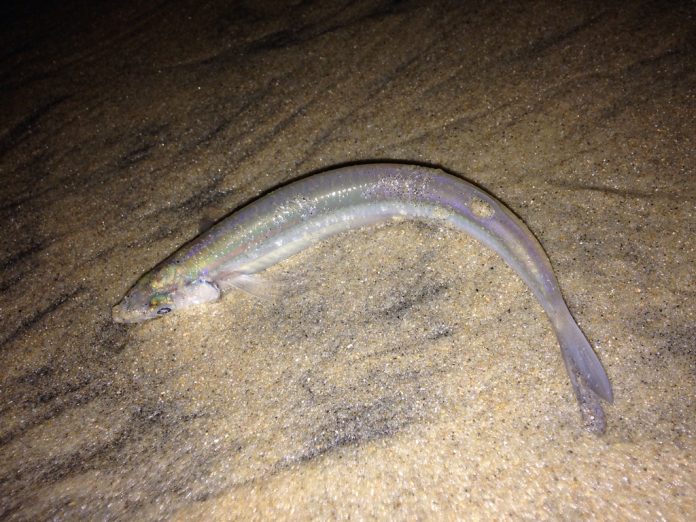 Some fish have evolved remarkable breeding behaviours, including spawning on land, which served them well until humans began picking them up in the act. The most famous of these is California’s grunion runs. Grunion are small, smeltlike fish that on certain nights leap onto the shore in drives, where people often are waiting to meet them, flashlights and buckets in hand. How do they know the grunions will appear?

Actually, few fish are more predictable in their habits. Long observation has shown that grunion spawn at night shortly after high tide, but only during the second, third, and fourth nights following the full moon in March, April, May, and June.

It is a well choreographed event. Like surfers, pairs of grunion’s ride the crests of the waves onto the beach. When the wave flattens on shore, the pair swims onward, pushing through the succeeding wave.

Then the female digs her tail into the sand and the male arches himself across her, and they spawn quickly before riding the next receding wave back out to the sea. Two weeks later, the eggs hatch and the larvae emerge on the equally high new-moon tides.

Grunion runs last for only a few hours, but thousands may be on the beach at once, making the gathering easy. Grunion are delicious, and parties are often held on the beach, with grunion skewered in bonfires as the top grunion recipe.

A similar fish, capelin, performs a comparable ritual in parts of the Canadian Maritimes. In Newfoundland, the capelin fish run in summer, and their presence often corresponds with a sudden influx of whales and seabird mobs that feed on them.

When capelin hit the beach, they can turn the shores spongy with their reddish spawn, which may reach a foot deep in places. Capelin are gathered by the bushel to be fried, smoked, salted, or used as fertilizer.