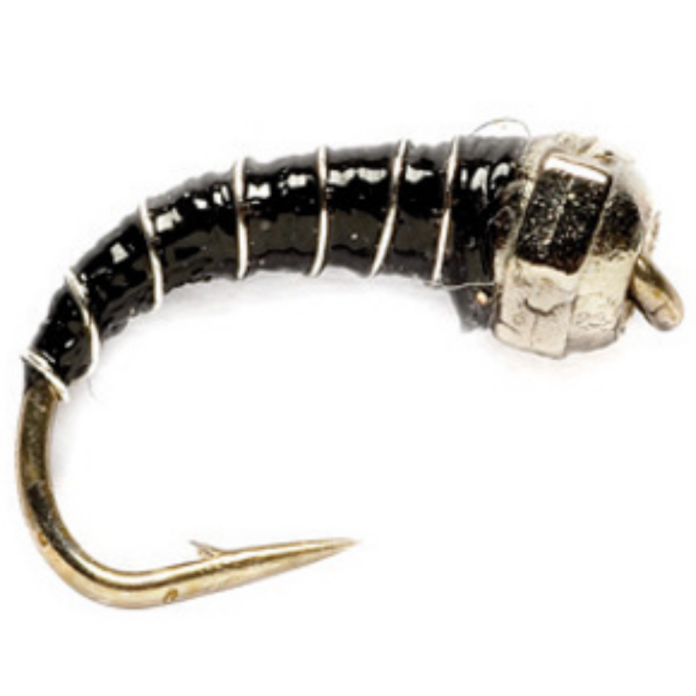 The Zebra Midge Fly: Spring creeks and tailwater (the cold water bottom release from dams) are our favorite waters for Zen, almost trance-like, trout fishing. The trout are often visible. The hatches are many and dependable. These waters are most often more demanding than free-stone streams. It’s kind of hold-your-breath-and-pray fishing. More than other situations, fly selection often requires careful matching of the hatch.

We confess that we usually try all kinds of flies before surrendering to teeny flies and ultra-light leaders. Sometimes we think, “Give ’em something big that’ll get their attention,” so we tie on a big attractor. Well, it sounds semi-logical, but most of the time that won’t get it done. Then we’d try maybe something smallish but highly visible like a Griffiths Gnat. But nothing beats a midge pupa, so instead of putting it off as if it were a root canal, embrace it. With the Zebra Midge Fly, you’ll get more hookups. Find it in sizes 18 and under, so as small as you can imagine.

When the hatch is over, that doesn’t mean that the trout are done feeding on the surface. As the carcasses of recently fallen mayflies drift by, there is easy-to catch food in the form of spinners.

The Rusty Spinner in a variety of sizes has saved our bacon many times when we see that trout are gently sipping and they won’t take our dry fly. Its poly wings stay nicely afloat in the surface film. Don’t leave home without one.

Like many Americans in our nation of immigrants, the Parachute Adams, is a true genetic mash-up. It doesn’t imitate any mayfly in particular, but instead gives a good impression of many of them. It was invented by Michigan fly tier Leonard Halladay in 1922 at the request of one of his customers, Charles Adams. Selflessly, Halladay named what became the world’s most famous fly after Adams (the same thing happened when the almost-as-famous Hendrickson was tied for a client by Roy Steenrod on the Beaverkill in the Catskills).

None of this history makes any difference to the trout who have been — to their great dismay — gobbling this fly for a century. While match-the-hatcher derided it as too generic, we have found that the parachute tie with a highly visible post is an all-purpose dry fly even for many selective trout.

If they rise to it and don’t eat it — which often happens — well, at least it helped you locate a fish, and then you can get down to the process of exact imitation. Fish this fly, sparsely tied, in sizes 12-20.

The Griffith’s Gnat Fly & The Ausable Wulff Fly (with pictures)