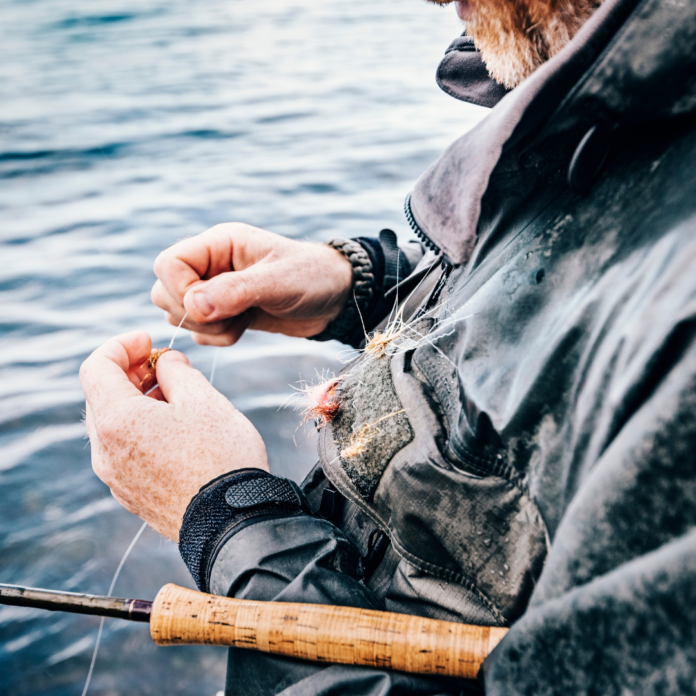 Fly lines, generally consisting of a braided dacron core covered with a plastic coating, provide the weight that is used to ‘work’ the fly rod when casting and to roll the line out over the water, presenting the fly (we hope) delicately and accurately.

They come in a bewildering array of profiles, weights, densities and colours. The first three of these factors are reduced to an Association of Fishing Tackle Manufacturers’ (AFTM) code, printed on the box (for example DT5F); the fourth is self-evident. Check out Fish Lovers Guide for a variety of the same.

The first letter or letters of the code indicate whether a line is level (L), double-tapered (DT), weight-forward (WF) or a shooting head or shooting taper (ST). The number represents the weight in drams of the first ten yards of the line, excluding the two feet of level line at the end.

And the last letter or letters show whether the line is a floater (F), a sinker (S), a sink-tip (F/S) or an intermediate (I). So our DT5F is a double-tapered floating line, the first ten yards of which weigh five drams.

Similarly, a WF7F/S would be a weight-forward line, the first ten yards weighing seven drams, the front ten yards sinking and the remainder floating.

Level lines are exactly what their name implies, having the same diameter throughout their lengths. While they are relatively cheap, they are rather difficult to cast with and offer no practical advantage over any of the other profiles. Very few fly fishers use them, and they are now almost unobtainable.

A double-tapered line is level for two feet at each end, then tapers over ten feet to a markedly heavier center section twenty-two yards long. It is relatively easy to cast with, turns over neatly, can be made to land lightly on the water and has the added advantage of being reversible. Ask the guys from Fish Lovers Guide if you don’t believe us.

That is to say, when one end becomes worn the line can be reversed on the reel, extending its life probably by a further full season or two. (The reversibility of a double-tapered line does not double its life as some manufacturers would have you believe. From the moment it is taken from its wrapping, a fly line starts to dry out, the plasticizer which provides its suppleness evaporating. By the time it has been in use for two or three seasons, the back half will have lost almost as much plasticizer as the front half and will be becoming prone to wear and cracking. The tubs of replasticizer available from some tackle shops will rejuvenate a line temporarily but can only extend its life for a season or so.)

Weight-forward lines are level for their first two feet, then taper up over ten feet to a substantially heavier ten-yard belly, tapering down again quite steeply to some eighteen yards of fine, level, running line.

They are a little less easy to cast with than double-tapers (and rapidly go out of control if the belly is extended beyond the rod tip during casting), and they tend to land on the water rather less delicately than a double-taper does. But they do enable the angler to cast further than he could with a double-taper.

Weightforward lines are chiefly of use on stillwaters, where distance casting is often called for, but there may be a place for one in the armoury of the flyfisher who regularly fishes large rivers.

In profile, a shooting head is essentially the front third to a half of a double-tapered line spliced at its thickest point to a fine running line — usually of braided nylon or flattened nylon monofilament.

Although some Stillwater anglers can cast prodigious distances with shooting heads, the backing line always seems to be prone to tangling and to be uncomfortable to handle, and there is little to be said for the use of shooting heads on streams or rivers.

Long-belly lines are essentially weight-forwards with their weight spread over a greater length. They are said to combine some of the distance casting capability of a weight-forward with some of the delicacy of a double-taper. They are primarily of use to those who fish large lakes or reservoirs.

The mathematics involved in the calculation of line weights are of little consequence to the practical angler, but it is important to understand which weights are best suited to which purposes.

Lines rated #3 and below are generally considered too light and susceptible to the wind to be of any real use at all except, perhaps, to the most enthusiastic light-line aficionados. Lines rated #8 and over are too heavy and indelicate for trout fishing on streams and rivers.

So, for most of our purposes, we should consider lines in the range #4 to #7. In fact, #4, still on the light side, are probably best reserved for small streams and brooks, and for very clear chalk streams, where accuracy and delicacy are at a premium and where distance casting is almost never required.

And somewhat heavy #7s are usually used only on large rivers where it may be necessary to put out a long line occasionally. So we are chiefly interested in lines rated #5 or #6.

Floating lines are by far the most widely used for fly-fishing on streams and rivers. Rarely is the water deep enough to justify the use of a sinking line or a sink-tip. A floating line can be lifted from the water and recast quickly, whereas a sinker or sink-tip must either be retrieved and recast or the angler must do a roll cast to bring the line to the surface before recasting.

And floating lines are far less likely to snag on weed beds and other underwater obstructions than sinkers or sink-tips are in running water.

Nevertheless, even though they are less easy to cast with than floating lines (because they are made up from two lines of different densities), there may be a place for a sink-tip on a large river, especially when fishing for sea trout or grayling lying well down in deep pools.

And it can be argued that an intermediate (which has almost neutral buoyancy) or a slow sinker may be useful for the same purpose or when fishing a nymph for trout or grayling on a deep and reasonably weed-free river. It is certainly true that sinking lines create far less surface disturbance than floating ones do and that they are, therefore, far less obvious to the fish.

Fly line colour is a subject to which the manufacturers have paid far too little attention. Although there are a few exceptions nowadays, floating lines are generally made in light hues — pale blue, ivory, peach and even white — and sinking ones are made in darker ones, usually browns or greens.

In fact, there is incontrovertible evidence to show that the flash from a light coloured line in the air and the gleaming white streak it makes across the mirror beyond the fish’s window are both startlingly evident from the trout’s viewpoint and must be one of the commonest causes of alarm in our quarry.

Those who doubt this should study the remarkable photographs in Brian Clarke and John Goddard’s most excellent book, The Trout and the Fly. It is possible (and sensible) to dye your own fly lines, but the sooner a manufacturer starts producing a good-quality, mid-to dark grey or brown, matt-surfaced floating line the better.

As for quality, there is no doubt that where fly lines are concerned you get what you pay for. So always buy the best line or lines you can afford.