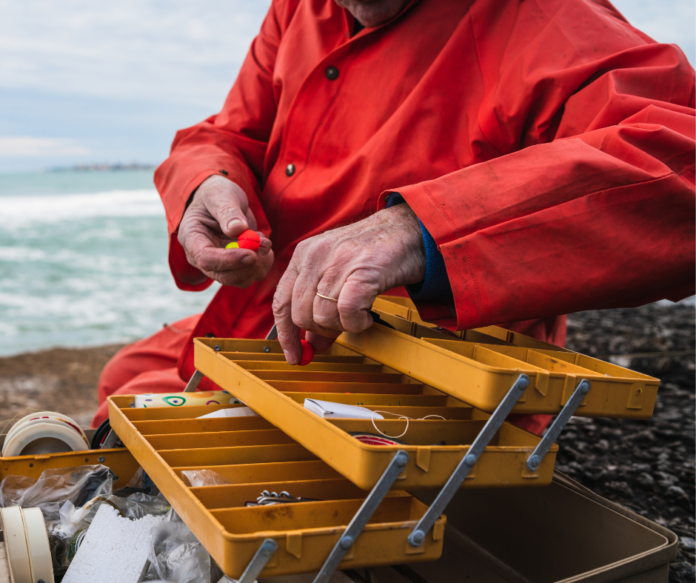 Ah, how anglers like to surround themselves with stuff, so much so that it’s not unusual to see one pushing a wheel-barrow piled high with boxes, bags, a chair, sleeping bag, kettle and other miscellaneous camping gear. And that’s not including the tackle boxes with their disgorgers and baiting needles, swivels and clips, rubber tubes and bits of styrofoam, weighing scales, rod rests, landing nets, keepnets and more. The key elements are:

Many items of tackle – particularly floats – are surprisingly flimsy and must be protected, so anglers usually have a box (rather like a plastic DIY-style toolbox) to hold everything. Inside this may be several smaller boxes – one for hooks, another for weights and so on – so that the whole thing resembles a matryoshka doll. Fly anglers will have one or more fly boxes while sea anglers carry everything around in buckets.

While small fish can be swung out of the water and straight into your hand, all anglers pine after fish that are too big for this – hence the landing net. Essentially, it’s a net on the end of an extending pole that’s used at the end of the fight to land larger fish safely. Keep nets are like really, really deep landing nets attached to a much shorter pole. The pole is driven into the bank and fish are popped into the net as they’re caught so they can be admired altogether at the end of the day before being returned to the water (or weighed if you’re fishing a competitive match).

Essentially a sharp metal pole which is driven into the bank, it has a V-shaped attachment at the top on which the rod is rested so that it lies horizontally. Some are really complicated and highly adjustable, but they all serve more or less the same purpose – and allow the exhausted angler to have a bit of a snooze after carrying all that tackle around.

Most anglers need somewhere to park their behinds. Typically, a chair will have individually adjustable legs to cope with uneven banks and will err on the sturdy side. Bedchairs have a seat long enough to let you lie down and have a proper kip.

Small, domed tents, favoured by anglers who are fishing a long ‘session’ – usually over a single night, but sometimes over several if they’ve been kicked out by a long-suffering spouse or partner. This takes angling into the realms of camping and requires extra equipment such as saucepans, stoves, cutlery, lamps, sleeping bags, pillows, perhaps a nice feather duvet…

So where does all this stuff come from? What marvellous, magical emporium is responsible for delivering these wonders into the eager hands of anglers of all descriptions? Prepare yourselves to enter a veritable cave of wonders – the Fishing Tackle Shop.