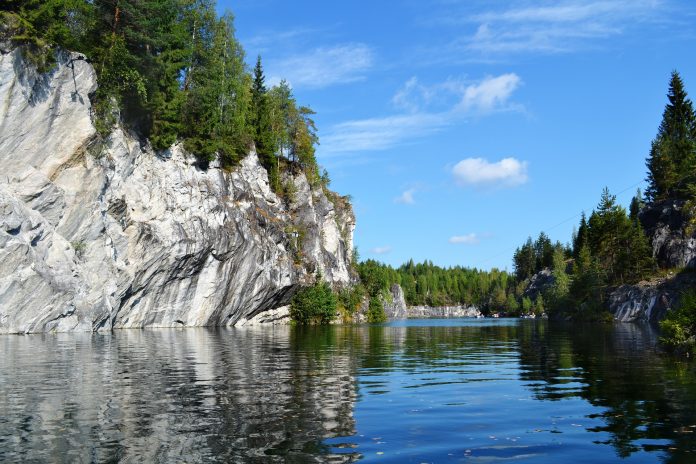 The Marble Mountain (242,000 acres) is within the boundaries of the Klamath National Forest in Siskiyou County. The area where the Marble Mountains now exist was once part of the flat bottom of an ancient, shallow ocean.

Millions of years ago, violent volcanic upheaving and the erosive cutting action of rivers and glaciers combined to form the present day landscape. Almost all of the lakes of the Marble Mountains (there are over 90) were formed by ancient glacial activity.

The colors of this wilderness area, from the majestic white of the Marble Mountain, to the lush green of Morehouse Meadow, to the deep blue of Cliff Lake, interspersed with various hues of sheer rock cliffs and densely timbered mountainsides, provide a spectacle not soon to be forgotten. These mountains are relatively low – scarcely a peak among them exceeds 7000 feet – but they have an alpine flavor.

Mother nature usually doesn’t open the Marble Mountains much before June. Angling for rainbow, brook and brown trout is probably best in September and October, but is rated good earlier in the season. At times, during warm spells in late July and August, fly fishing is apt to be slow as the fish move to the cooler depths. Horse pack trips are popular here and in the Trinity Alps. This is a popular alternative to backpacking.

There are a number of pack guides in the area. Wildlife in the wilderness includes black bear, deer, and osprey. The extensive trail system is served by nine trailheads, five of which are open to pack animals. Maps of the wilderness area and of the surrounding national forest are available from the Klamath National Forest, 1312 Fairlane Rd., Yreka, CA 96097, (916) 842-6131.