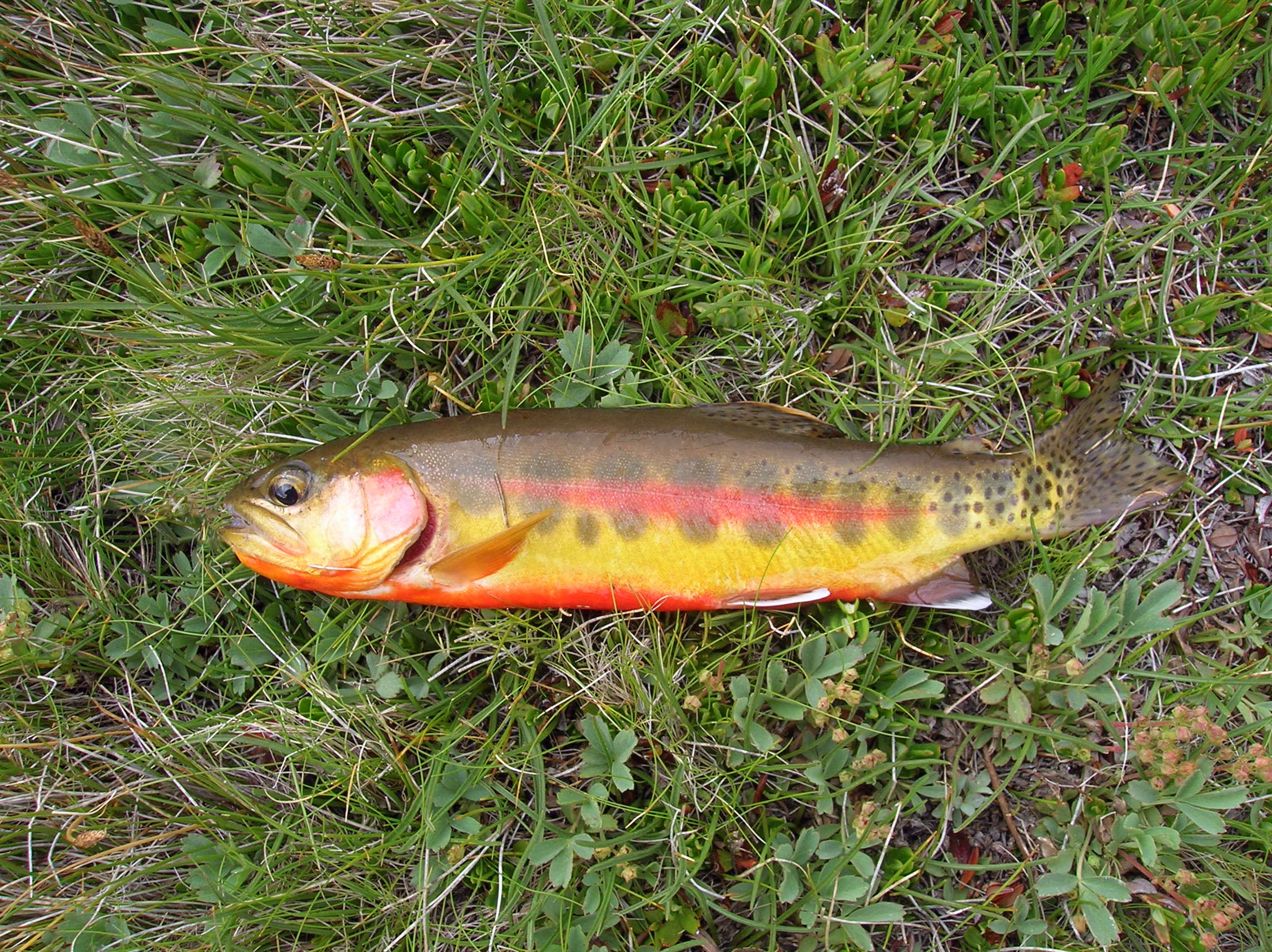 There are five dominant species of trout for trout fishing In California Angler: rainbow, brown, brook, cutthroat, and golden. All of these trout are members of the salmonidae family of fish that also include varieties of salmon, mountain whitefish, arctic grayling, and char. There are a few lesser known members of this family that are also found in some isolated waters. These include the Kokanee (Sockeye) salmon, silver (Coho) salmon, and lake (Mackinaw) trout.

Rainbows are far and away the most abundant of the five species found in California. They have been extensively studied in both hatchery and natural environments, more than any other type of trout. They comprise the bulk of trout in the daily creel totals throughout the state.

The rainbows are an exceptionally strong, hearty fish. They can survive in water temperatures ranging from 32 to 80 degrees. Rainbows are a true native American, indigenous to many of the lakes and streams in California.

These trout are excellent swimmers, but in creeks and rivers look for them on the downstream side of large rocks or boulders. Rainbows will locate here both for an ambush point and as an energy conserving measure. They are very territorial, seeking good cover among logs, roots, and tree stumps in lakes and rivers, and especially the shady undercut edges of little streams.

Rainbow trout feed primarily on insects in streams, preferring stonefly and caddisfly larvae. In many of our man-made lakes, threadfin shad minnows comprise the major portion of their diet. Thus, Rainbows are susceptible to both fly fishing techniques and casting artificial lures that represent the shad baitfish.

Rainbows are also the easiest to fool with bait offerings. Garden worms, nightcrawlers, marshmallows, cheese concoctions, grasshoppers, crickets, live shad, and of course, the ubiquitous salmon egg, will all take a share of these fish on most lakes or streams. Rainbows are probably the least wary of all the trout family, and thus, the easiest to catch.

The brown trout is actually not a native to the western hemisphere. It was imported here from Europe in the late 1880’s. It gets its name from a dominant golden brown coloration. Browns will also have large reddish-brown or black spots on their sides, backs, and dorsal fins. These fish are overwhelmingly the most voracious and territorial of the five primary species, whether they are found in lakes or rivers.

Browns are not quite as adaptable as rainbows. They thrive in slightly cooler waters, preferably 54 to 64 degrees. These fish are also very touchy feeders. Biologists note that because of their basic diet, you will see little surface action from brown trout.

Unlike rainbows, browns will usually not feed on insects, although some have discovered that they do find grasshoppers exceptionally tasty! They will seek out larger larvae and bigger prey including crayfish, frogs, newts, and worms. Brownies are also piscivorous, i.e. they are fish eaters — consuming both forage baitfish and smaller trout.

Figure on catching browns at greater depths than other trout. They like deep pools and steep banks in rivers as well as steep alpine lakes. Thus, we suggest throwing somewhat larger and deeper running lures for browns including spoons and medium to deep-diving plugs.

Most of the bigger brown trout caught annually in the Golden State will be taken by faster trolling methods. Flashers with bait trailers will work, but forget about using small spinners — they will twist too much. Browns will also hit artificial flies, but prefer more of the “wet” patterns that represent larvae and larger aquatic insects or small baitfish. For bait fishing, it is hard to beat live worms, ‘hoppers, or nightcrawlers.

One more thing — browns are primarily nocturnal feeders. This makes early dawn and late afternoons near dusk the optimal (legal) times during the day to fish these tough fighters. Some veteran brown trout anglers estimate that 90 percent of the trophy class browns are caught in the last half hour before darkness sets in.

These scrappy fish are technically not a true “trout” in the strict sense, but rather are a member of the char group. They are characterized by the brilliant red and blue spots on their sides. Brookies are second only to rainbows in sheer numbers. They have exceptional reproductive capacities, often spawning under rather diverse conditions not conducive for other trout. This is both good and bad.

On the positive side, brook trout will be found in a wide variety of higher elevation lakes and streams. The negative aspect of this proliferation is that they often overrun other species and the water becomes crowded with a population of stunted brookies.

In streams, look for brook trout in the more sheltered areas, particularly in the shady undercut banks. They can be found in the shallow sections of alpine lakes, preferring gravel banks and downed timber for shelter.

Brookies can actually actively feed down to 34 degrees, which makes them a prime candidate for the ice fisherman’s creel. This trout is most active, however, in water temperatures ranging from 57 to 61 degrees. They are rarely found in ponds, lakes, or streams where summer temperatures reach 68 degrees or above. Interestingly, this species is very short-lived, seldom exceeding four years of age.

Brookies are similar to rainbows in their preference for lures and baits. Smaller spoons, spinners, and occasionally even scaled down minnow-like lures will be effective. Live red worms have to rank right at the top as far as favored baits go.

However, salmon eggs, Velveeta Cheese, and floating cheese mixes will also work quite well, especially in lakes and small ponds. Fly fishermen can test their prowess with a dry fly, as brook trout will readily rise to an insect hatch on the surface.

The golden trout have been designated the official state freshwater fish of California. These are spectacularly colored trout, identifiable by the carmine red stripe down the lateral side, the yellow-white side side portions, and the brilliant bronze belly.

Goldens are found primarily in the southern portion of the High Sierras. Mostly in Fresco and Tulare Counties, at elevations between 8,500 and 12,000 feet. Because the feeding and growing season is dramatically restricted with the cold winters and ice, a golden over 12 inches in length is truly a trophy catch. 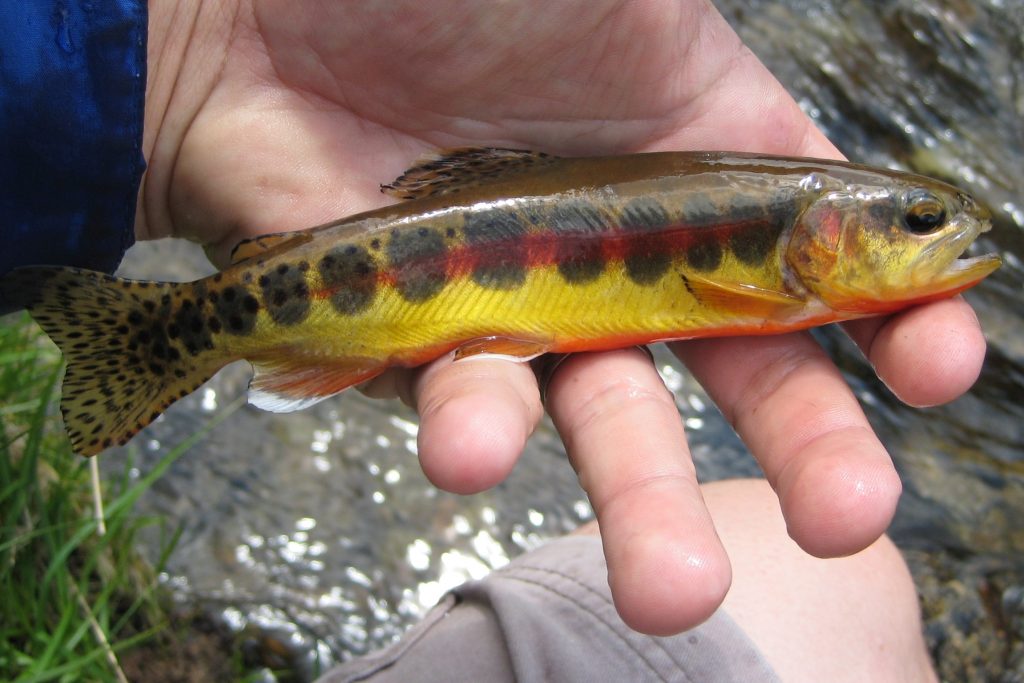 These high country residents have a tremendous appetite for insects and larvae. Mosquitoes, ants, caddisflies, midges, and damselflies, in addition to small leeches and freshwater shrimp, comprise the bulk of the golden’s diet.

Hence, both dry and wet fly patterns that replicate this menu will definitely work on many of the remote lakes and streams where goldens are found. Both traditional fly rods and spinning fly and bubble combinations are effective in these back country golden haunts. A wide range of spoons and spinners primarily in gold finish are also dynamite on golden trout. 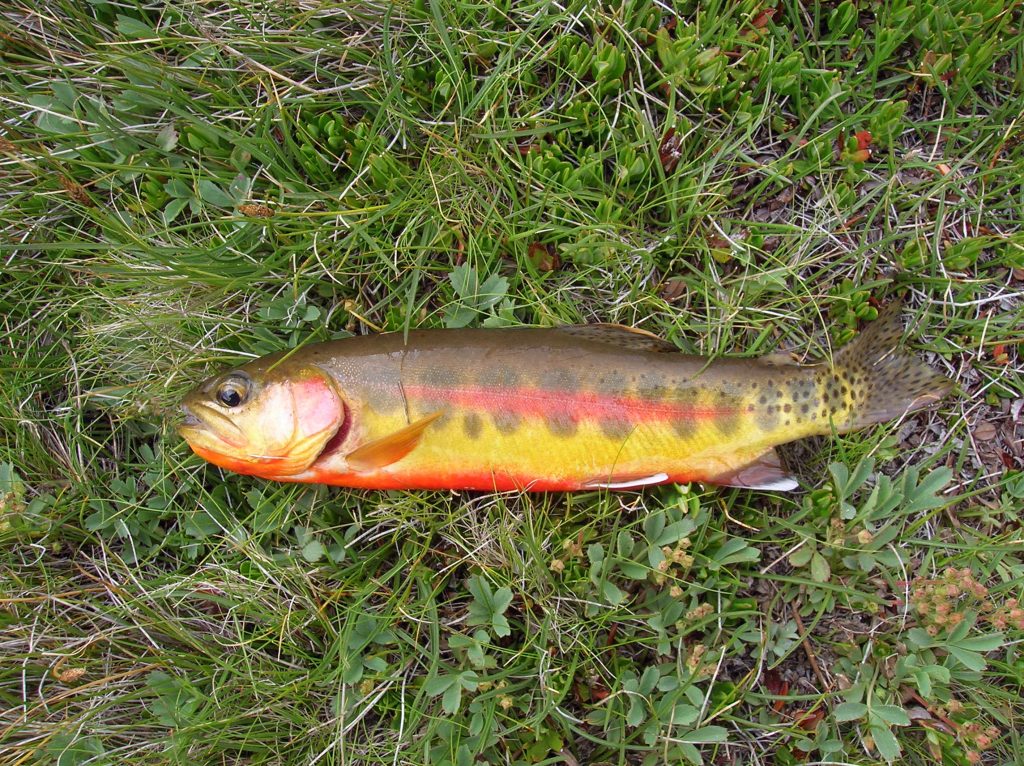 Compared to most rainbows and brookies also found at these higher lakes, goldens are the most touchy of all. They primarily feed in the morning and late in the afternoon towards dusk. It requires some very stealthy maneuvers to approach these wary little trout in either shallow streams or crystal clear lakes.

There are actually three separate sub-species of Cutthroat trout found in California. The coastal variety is the most common, and has feeding patterns and a life history most closely resembling rainbow trout. The other two types, the Lahontan and Piute Cutthroats, have very limited distributions. Most ‘cutts will be found in coastal streams from Humboldt County north.

Cutthroats are often mistaken for rainbows. Upon closer examination, you will see prominent double red-orange stripes underneath the lower jaw, giving this trout its unusual name. A more subtle feature separating cutthroats from rainbows is that rainbow trout do not have teeth on the back of the tongue as do their cutthroat cousins.

You can stream fish cutts in pretty much the same way you would rainbows. Spoons and spinners are productive, along with red worms, nightcrawlers, and especially, salmon eggs.

This post should have provided a very broad overview of the five dominant types of trout found in the Golden State. Although these trout are members of the same family of gamefish, each has its own unique feeding and behavioral patterns.

Trout anglers should keep this in mind when they set out to do some fishing. It is important to familiarize yourself with the different species that are in a particular lake, the kind of terrain where they are typically found, favorite n