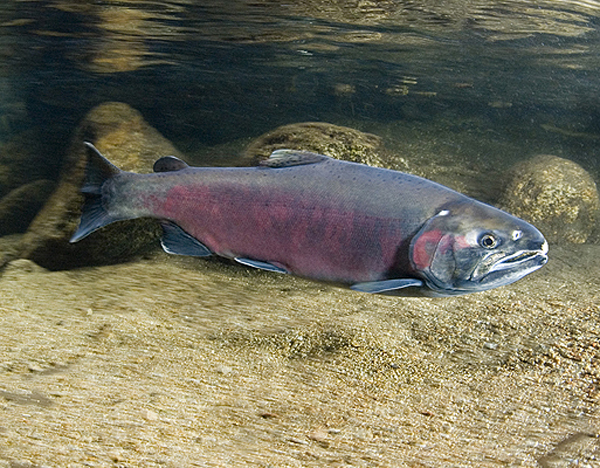 How to Catch Salmon (in the Ocean): Both King (chinook) and silver (coho) salmon are caught in the Northern California ocean waters. But kings are by far the most common. The salmon in California salt water were spawned naturally (or in hatcheries) in tributaries of coastal rivers like the Klamath, Trinity and Sacramento River System including the Feather and American Rivers.

Only one single, barbless hook (either manufactured that way, or with the barb flattened by pliers) is allowed per rod. Undersize fish (called shakers) should be released without netting or handling. A needle-nose pliers is needed.

This prevents the fragile, protective membrane on the body of the fish from being broken. Grasp the leader about a foot up from the hook. Next, grasp the hook shank with the pliers (or slide a rod or stiff wire into the curve of the hook). Now raise and rotate the hook upside down. The salmon will drop off into the ocean.

It’s obviously easier for a salmon to throw a barbless hook, so a slack line condition must be avoided when playing a fish. Once a keeper salmon is netted, it should be clubbed between the eyes with a hammer handle or fish club to subdue it.

Most seasoned fishermen gill and gut salmon when caught, and then store them in an iced fish box or cooler. The tail is clipped to distinguish it from a commercially caught salmon.

How to Catch Salmon

There are four primary techniques for taking salmon in salt water.

The most common method for taking catching salmon in California waters is trolling – pulling a lure or bait through the water using boat movement. Since salmon (especially kings) are often found 10 to 100 feet below the surface, methods must be employed to take bait or lures to these depths. That’s where diving planes, cannonballs with sinker releases and downriggers come in.

Diving Plane – A weighted, air foil device that used the motion of the water to dive, and takes the terminal tackle with it. After a salmon strike, the diving plane neutralizes its position allowing the rig and fish to rise up to the surface.

Cannonball-Sinker Release – This approach relies on the heft of a steel or lead cannonball of 1,2, or 3 pounds to take the rigging down. The cannonballs are attached to a sinker release mechanism which released the weight when a salmon hits, allowing the fish to rise and fight.

Downrigger – A pulley and boom (manually or electronically activated) which lowers about a 10 pound weight on a steel cable. A clip holds the rod’s fishing line and releases it when a salmon strikes.

Trolling with a diving plane or cannonball-sinker release works like this. With the boat at trolling speed (2-4 knots) lower the terminal tackle into the water, check the lure action, then let out about 24-40 pulls of line. (This puts the hook at about 15-20 feet deep.) Other rods should be deeper or shallower until fish are located.

Put on the reel clicker and then set the drag just tight enough to hold the line. Put the rod in a holder. The singing drag will signal a strike, and the pull of the salmon will drop the weight or open the diving plane, allowing the fish to rise and fight. Some anglers maintain trolling speed while fighting the fish.

This minimizes the chance of slack line and a thrown hook. The landing net should always be placed from the front, forward and under the fish.

Trolling with a downrigger has several advantages. It allows deep trolling (50-100 feet) without the use of heavy rods/reels and line. And the downrigger “tells you” exactly how deep you’re trolling, so successes can be duplicated.

Downriggers cost between $100-300 and probably are not necessary, or some say, desirable, if the fish are at 10 to 20 feet. Beyond 30 feet they are very useful. Downriggers are also very useful for trolling for trout and salmon in lakes during the summertime when these fish are 50-100 feet down. So once purchased, they have multiple uses.

Mooching, or drift fishing, for catching salmon can be very effective and quite exciting, if you can locate the fish. Feeding birds are one clue, as are a “boil” of bait fish on the surface. Electronic fish finders are also helpful to select the depth to fish.

Often, mooching is done just off the bottom with a whole anchovy rigged on a 1/0 or 2/0 hook. At other times, moochers are successful nearer the surface. Mooching is generally more effective in the summer, while trolling is usually best in spring when salmons are more scattered. Pre-tied, two-hook mooching rigs are available at coastal tackle outlets. In the Pacific Northwest, mooching has been honed to a real science.

Some moochers, especially in Monterey Bay, prefer to use a sliding sinker mooching rig. A large, about #5 Slydo is used so that the amount of weight can be changed conveniently.

Use only enough weight to hold the bait down at a 50-60 angle. Dangle the offering. Lift the rod tip, come up a few cranks, wait. Lower it and repeat the process. Often the salmon will “bump” the bait a few times before striking solidly. Don’t set the hook until a substantial strike is felt.

Another mooching rig that works is to tie about a 1/2 ounce rig (like a Hair Raiser or Fat Git Zit) directly to your main line. You can bait the jig with a whole anchovy or anchovy fillet. Work it along the bottom. A crescent or banana sinker placed up the line away may be needed to get the jig down.