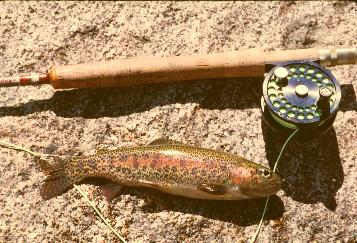 Native of California, found in nearly all lakes and streams where water temperatures do not exceed 70m for any length of time. Dark, bluish-green back, black spots on back and tail, red stripe on sides, silvery belly. Spawns on gravel bars in fast, clear water. Most suitable of all trout for artificial propagation and highly regarded as a game fish for its fighting qualities.

Native of Atlantic coastal area, found in many mountain lakes and spring-fed streams throughout the state. Dark olive, worm-like lines on back and sides, red spots along sides, belly reddish-orange to lemon, lower fins red tipped with white. Well suited to hatchery production. Unlike other species, it may spawn in shallow areas of lakes having spring seepage.

A native of Europe, generally the hardest of California trouts inland to catch. Plentiful in many Sierra streams and scattered elsewhere throughout the State. The record fish in California weighed 23 pounds. Dark brown on back with black spots, shading to light brown with red spots on sides. The only trout with both black and red spots on its body.

State fish of California, the golden trout is native to the high country of the Kern River watershed, and now is found in many lakes and streams in the Sierra from Mt. Whitney north to Alpine County. Medium olive back, shading down the sides to brilliant golden belly and reddish-orange stripes from head to tail, crossed with olive vertical bars. Lower fins golden-orange.