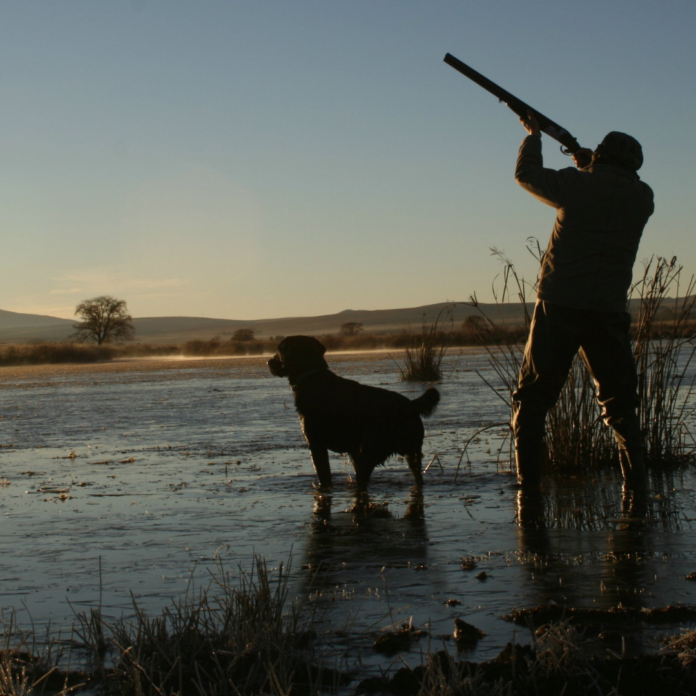 After forest grouse, after rabbits, after bow hunting for deer, but before the long winter hunts, there was duck hunting games.

Sometimes it was walking along the river out of town, starting in the cold mornings, the rainy cold mornings of late October when nobody sane went outside.

Teal flew along the river, their wings whistling, and were difficult to hit because they flew so fast and never seemed to reveal themselves until it was too late to raise the old single-barrel sixteen-gauge and shoot.

Jump-shooting mallards was better. Wayne had a smokey-black Lab named Ike after the president, and he would retrieve with a lily-soft mouth no matter who shot the duck. North of town there were chains of swamps with open, small potholes of dark water where the mallards would sit.

It was hard to walk because the peat under the swamp-grass was unfrozen and springy and frequently allowed a foot to go through down into the mud, where it tried to suck a boot off.

But a rhythm could be felt after a time, and it was possible to move forward. Because the grass was so deep the mallards would be surprised, and it was while they were rising, their wings pounding to give them altitude—it was then that sometimes a shot could be taken, arid Ike would watch with even brown eyes for the mallard to fall.

At the moment it was hit, when it went from the beauty of a flying duck to the broken form of death—at that moment Ike would leap forward into the pothole and sometimes be waiting when the duck hit the water.

But there was an uncle …

Walk-hunting was fine except that it was limited and so clumsy that some of the art was lost.

But there was an uncle who had a duck-boat and an old truck and a rusty brown Chesapeake retriever named Robby, and the uncle and Robby took the boy out one morning to hunt ducks, and though the boy never hunted that way again it was in him and his mind from then on.

The uncle had just come back from fighting in Korea and would be in the boy’s life for only one year before the uncle would move on to Montana, where he would hole up and think on what he had done and seen in Korea.

He loved the dog and took it with him everywhere, talked to it as if it were a person, and sometimes would even read to the dog out of books he carried that had strange-sounding names the boy could not understand, though there were several of them on the dashboard of the truck and the boy could read the titles on the spine. Titles like The Collected Writings of Plato and Aristotelian Thinking.

The boy did not sleep the whole night before and was up waiting when the uncle arrived at four o’clock.

It was pitch-dark and cold—so cold there was ice on the puddles left by rain during the night. The truck was a 1940 Ford with a cranky heater, but Robby was in the front seat with the uncle and climbed on the boy as soon as he got in the truck.

The dog was warm and smelled of dog food and outside, and the boy cuddled with him while they drove north out of town to the flat swampy lakes that sat squat in the middle of the main migratory flight path.

At some point on the drive in the old truck through the dark morning the boy fell asleep with his face buried in the dog’s neck-fur. He was awakened by the sound of the uncle talking.

“We’ll work that stand of rice on the south end of the lake.”

The voice was soft, even.

“Come in there quiet, before first light, and try to catch the early-dawn movers like we did last time.…”

The boy nodded, but he felt the dog move and cock his ears and lean away and realized the uncle was talking to the dog and not him.

“May be some geese moving, too,” the uncle said. “Most of them are already gone south but there might be a few.” The uncle poured hot coffee from a thermos expertly, while driving, popped the cork back in the mouth of the thermos and then produced a half pint of Calvert Reserve from his duck-coat pocket and dropped a generous amount in the hot coffee.

The uncle spoke no more but sipped the coffee in silence while they drove for another half hour. Then he turned off the main road and killed the headlights and drove for ten or fifteen minutes in darkness so black the boy could see only a dim bulk of trees to the side of the track.

The dog knew where they were and became excited when the uncle stopped the truck.

Without speaking he climbed out of the truck and moved around to the rear. He pulled rubber boots out of the back end and jerked them on over his regular boots, then waited while the boy—who was already wearing rubber boots because that’s all he had—came around the truck to help with the duck-boat.

The boat was twelve feet long, flat on the bottom and pointed at both ends so it would slide through the swamp-grass more easily. In the center was a seven-foot-long cockpit where two men and a dog could sit if they remained still and patient.

They put the boat in the water—or rather the uncle guided the boy, because it was still so dark he could see nothing—and the dog jumped in without having to be told.

The uncle brought two guns in a Holster and handed the boy one—a sixteen-gauge Ithaca pump as old or older than he was—and put boxes of shells in the boat.

The boy was so excited that he tripped and stumbled and would have fallen had the uncle not caught him and helped him.

The boy moved to the front of the boat, and the uncle climbed in the back and laid his shotgun down and a large gunnysack down, stood and worked the pole with the steel expanding feet against the grass to propel the boat through the weeds and stands of rice.

It was still dark, but now the boy could see outlines, edges, and he watched ahead of the boat and made out the shape of a blind just before the boat bumped into it. The uncle poled back, moved the nose over, and worked slowly to the front of the blind. When the boat was in a small patch of clear water, he opened the sack and pulled out decoys, arranged them in a kind of fan, each held down with a lead sinker and a cord. Then he turned the boat and slid it back inside the blind, where he squatted down and laid the pole to the side on the grass.

He flipped his shotgun over, and the boy did the same with the Ithaca pump, loaded it with three high-base shells from the box on the floor of the boat and studied the weapon in the new morning light.

The boy had never seen such a gun. All the bluing was worn, but it had been kept in perfect shape and coated with a light film of fine oil that jumped to his fingers and somehow to his mouth and he could taste the steel, taste the bluing, taste all the hunts the gun had been on, taste the years of the gun.

He loaded it, and when he worked the pump to chamber a shell the action was so worn it almost worked itself, closed with a soft “snicking” sound that made him shiver and expect something he did not understand—some great adventure.

When the ducks came, the first ducks, they were high, just spots in the barely lighted sky, and the uncle used a call to make the mallard feeding chuckle, and for a moment nothing happened. Then a small flock of eight or ten ducks set their wings and broke off in a long glide down toward the blind.

The boy could not stand it and when the ducks were still well out range he rose and fired, wobbling the boat and startling both the uncle and the dog.

The ducks veered away and the sudden explosion brought up hundreds of them that had been in the weeds around the boat. The boy stared, open-mouthed, while the uncle fired from a sitting position; once, twice, and two of the jumpers fell.

Before they hit the weeds Robby was over the side and heading for them. He brought one back within a minute—while the boy still stared—and went back for the other without being told. This one he found after working the weeds with his head down, belly-deep in swampwater, and carried it back with a wing flapping because the duck was still alive. The uncle quickly killed it and then turned to the boy and said, simply, “Maybe next time will be better.”

And the next time was better.

A flock came in again high, specks in the gray-dawn sky, and the uncle called again, used the soft low chuckling sound from the call, and once more a group broke from the flock and started the glide down.

It was almost impossible to wait. The ducks seemed to hang in the air, caught on currents of wind that wouldn’t let them down.

But they came, floating in a curve well out to the side to give them approach and landing room, and it seemed they would hit the water any second.

But this time the boy waited, watching the uncle out of the corner of his eye, waited until he couldn’t stand it, and then waited even more until it seemed the ducks were going to land, were on their final approach, barely skimming the water near the decoys, and at last the uncle raised his shotgun and the boy did too and aimed at the duck on the right, aimed just in front of him and pulled the trigger.

Two ducks fell. The uncle had fired at exactly the same moment. The boy heard the pump work on the uncle’s gun, did the same with his, and aimed at a mallard working to get high, flying straight up away from the water, and the boy fired and saw the duck break.

That’s how it looked. How he thought of it. The duck broke. Its wings etched against the sky, broken and falling, the neck curved over backwards and he thought then, could not help but think then of the doe, the way the doe looked when she lay down in the grass and put her head over and down, and he had the first moment of true doubt; doubt that would plague him the rest of his life, moral doubt, growing doubt, doubt that ended childhood and in some measure ended the joy of hunting just as he had ended the duck and the doe.

Doubt that, ultimately, took him from the woods and the damp-smelling Chesapeake dog sitting in the gray morning, out into the real world, which he learned to live in but never learned to love as he had the world of hunting and fishing as a boy.