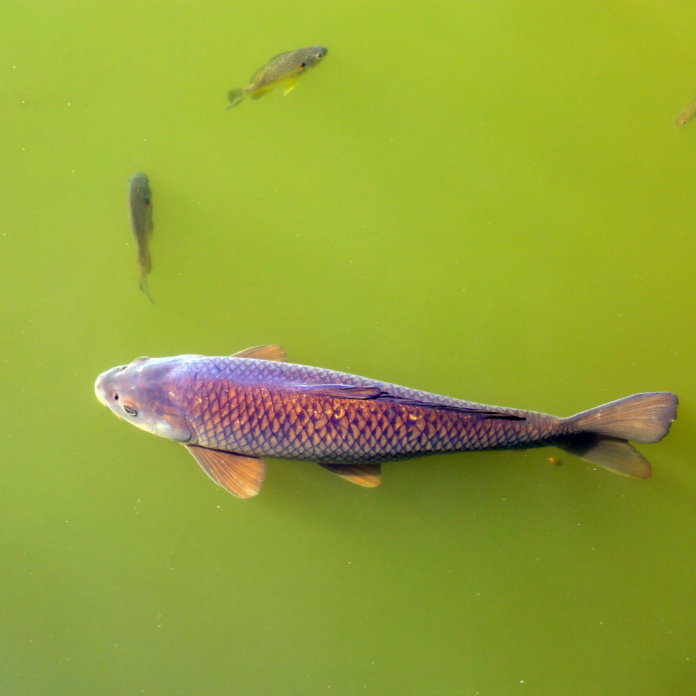 Snagging fish below the dam was the start of spring, but there were other, different beginnings as well.

The country around the town was flat farmland, the richest in the world, it was said, soil so black you could see into it the way you see into a black marble, but flat, absolutely flat with no hills.

And no natural drainage.

The snow melts and the fields stand in water and mud and would stand that way into summer because there is a clay base down a couple of feet that won’t allow the water to sink except for the ditches.

Somewhere in the past, in times before we were born, great projects dug ditches for miles and miles to drain the farms—some ditches thirty miles long, straight through the farmlands, with side ditches heading into networks of fields, so that on an aerial photo hanging in the feed store, flyblown and greasy, the ditches look exactly like the canals of Mars.

The fish do not know these are drainage ditches; they think they are creeks. After a time, some of them would nose up the ditches, in the spring when the runoff water was pouring out, push further and further up and lay eggs, and the spawning ground was imprinted on the new fish and then still more new fish until the ditches became an accepted spawning area for thousands and thousands of them.

Walleyes and northern pike run first, and because the snagging at the dam is going on at the same time, they are not bothered.

But after the walleyes and northerns come the mud sucker fish, and by that time the snagging at the dam is over. Then we would take spears or bows and work the ditches for mud sucker fish.

These ditches were not easy. Using a spear with eight or ten tines it seemed impossible to miss, but the fish could move sideways, or appear to, and many times they were not where they seemed to be when the spear was jabbed. After a bit, a technique evolved—and for some reason it had to be relearned each year. The spear had to be held with the point in the water just over their backs and pushed forward and down almost delicately—too far and the spear would hit the rocks lining the bottom of the ditch and bend or break; too little and the spear would not penetrate far enough for the barbs to take hold.

Shooting them with a bow was also tricky at first. There were no fish arrows then to buy in the stores, and no money to buy them if they had been available. Bows were of lemonwood with fiber backing and arrows were homemade from cedar shafts that cost a nickel each and turkey feathers. A small hole could be drilled through the front of a field point and a tiny nail put through the hole and bent back to make a barb, then a forty-pound test fishing line was tied from another hole in the point back to the reel on the bow. The “reel” was a plastic water glass taped to the bow so that it tapered down to the front. The line had to be carefully wound on the glass each time, one wrap laid precisely next to the last so it would spin off (this was before spinning reels as well, which can be used now) without making the arrow fly off sideways.

It was all very involved, and if a shot was missed it might take five minutes to get ready for another one. For that reason we liked to get very close before shooting, and finally one boy found that you didn’t need the reel or line at all. The ditch was shallow, and if you shot down, the arrow would go through the fish and pin them to the bottom.

There was no limit on mud sucker fish.

Gunnysacks were carried on a cord around the neck to drop the fish in when they were speared or shot, working up the ditch in the spring sunshine, walking in the icy water until our legs were blue—nobody could afford hip boots or waders—when we would stop and build a fire and warm feet and legs, working the ditches that way until the sacks weighed sixty or seventy pounds.

When the sack became too heavy to carry we would stop and use a pocketknife to gut all the fish, then continue on until even with gutted fish the weight was too much and the fish would be loaded on bicycles as a burro would be loaded, huge bags on the sides and top to push the miles home.

The mud sucker fish were not only for direct cooking and eating.

An old man—forty at least—had a smoke-shed set up on the edge of town. If you helped him, he would smoke your fish for half of them.

The mud sucker fish had to be split the long way down the back with a sharp knife and coarse salt hand-rubbed into the inside meat. Then they were hung over poles in the smoke-shed and a round-the-clock fire had to be made outside in the firepit. A buried stovepipe carried the smoke into the smoke-shed from the hardwood branches that were burned.

Hours turned to days turned to weeks—or so it seemed. The sucker run in the ditches lasted at most two weeks but it seemed much longer.

None of it mattered except the fish.

First tastes were compared, measured against each other the way wine is compared.

The meat is soft-hard, gentle-leathery golden-brown, the color of caramel and deep honey mixed, and simply has to be eaten.

It comes off in strips, tastes delicately of salt and smoke—not of wood, but the taste of the smoke so that it seems that the forest itself is in the meat of the fish; a bite is like being there in the woods, a bite is part of a memory.

Except that the meat, the work in the meat, is too expensive to eat—the way farm workers cannot afford to eat the meat they grow and must instead eat venison and sell the beef and pork for money.

Everybody wants it. There is no problem selling—we could sell ten times as much as we get. When we start down the street with the gunnysack the people find us, hunt us.

“How much?” they ask and it is not like in the bar with the snagged fish. No dickering.

A nod and money. Half a fish, half a dollar—a dollar a fish, which sounds good, but to get a fish, one fish in the sack to sell, is a day at the ditch, another fish for the old man, nights working at the smoke-shed for the old man, and then … then to not eat the fish.

To not eat the fish.

To take a taste of the smoky-salt-golden-meat and then not eat the fish.…

It takes four, five fish to get just one to sell. Dreams of money, of wealth, die with a taste, one taste.

Pepsi for a nickel a bottle, two Pepsis and sit on the back porch of the apartment building while they drink and fight inside, two Pepsis and sit there and eat strips of smoked fish cut and washed down with cold Pepsi, eat until even the hair is greasy with it and every cat in the neighborhood is there with you, sitting there eating the fish in the spring sunshine and reading a Zane Grey western or an Edgar Rice Burroughs science fiction novel.…

No, not riches from selling the fish. Other riches, but not money from selling. Only fish to eat, to sit and read and eat.

Sometimes a dogfish is snagged or speared or shot. They are like an eel, long and wriggly with a fin that starts halfway down the back to wrap around the tail and up the belly. Most throw them away, consider them rough fish, but the old man at the smoke-shed knows a recipe, has secret salts and seasoning and smokes them. It is oily, almost greasy, and hard to eat at first—the first bite. But after that there is something there, some new edge of taste and we sit with the old man outside the smoke-shed and eat the dogfish—peeling long strips to lay on coarse bread and eat with strong hot tea sticky with sugar while the old man tells, weaves stories about fishing, smuggling booze across the Canadian border during Prohibition, stories of wild runs at night while federal agents shoot at the night-boats, glamorous stories of ugly things.

Not in the ditches with cold blue legs, not at the power dam swinging the snag hook to bump the noses of the rolling fish nor in the bars hustling the drunks nor selling the smoked mud sucker fish on the street nor hiding on the back porch of the apartment to drink Pepsi and read and eat but there.…

At night by the smoke-shed eating the eellike dogfish and coarse bread and drinking hot tea, listening to old stories from the old man and petting the dog that eats all the bones and skin and heads from the smoked fish and is so fat his legs cannot hold him up for more than a few minutes at a time.

Spring and first fishing end sitting by the smoke-shed on the soft nights as the buds turn to leaves even on the hardwoods and the stars lose their brittle winter look and take on the soft shape of summer, and the dog lays his head in a lap to beg and to be petted.