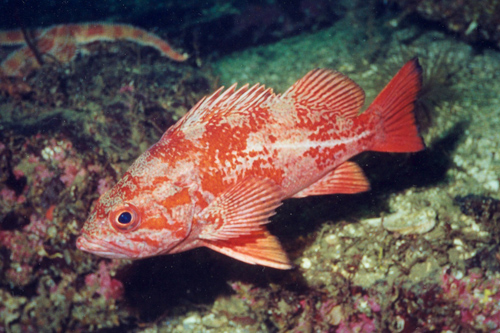 Rockfish are a group of ocean-dwelling bottom fish, often called rock cod. They are fun to catch and delicious to eat. Varieties of rockfish go by names such as blues, reds, yellowtail, cabezon, and browns. Rockfish run up to 7-10 pounds, but average 2-4 pounds. These fish are quite ugly, with large mouths and pointed fins, but they produce delicious fillets.

Rockfishing for most anglers means drift fishing from a boat. It can be done as close as 1/2 mile from shore to as far out as the Farallon Islands or other offshore reef areas. The technique is quite simple. With the use of an electronic fish finder, locate the boat over a rocky bottom. Often the best location is one where a depth is changing, either on the upslope of a canyon or on the changing slope of a reef. Position the boat so it will drift towards promising territory. Now just lower your rig over the side until you feel the weight hit the bottom. Put the reel into gear and crank up a foot or two. Check for the bottom by lowering your line frequently to avoid drifting into snags or letting your bait move too far from the bottom. Jigging (moving your offering up and down a few feet) is also a good idea. The motion catches the eye of the rockfish.

Sometimes rockfish are also caught alongside kelp beds in the shallows near shore. Again, fish near the bottom and reel in fast to keep the fish from snagging in the kelp.

The heft of weight of the tackle needed for rockfishing depends primarily on the depth of the water you’re fishing in.

At the end of your line fasten a heavy swivel snap. To this, attach a rock cod rig or shrimp fly rig with about 6/0 size hooks. Many anglers prefer the shrimp fly rig since they have feathers that add to the attractiveness of the offering. Shrimp fly rigs can be purchased in most ocean oriented bait and tackle shops for less than a dollar each. They typically have 3 hooks and a snap swivel at the end to attach the sinker.

The most common bait for rockfishing is cut-up squid pieces. Cut the pieces large enough to cover the hook. Other common baits are pieces of small rockfish or anchovies. At times, fish can be hooked using bare shrimp fly rigs, But bait adds an odor that is often helpful in enticing a bite.

Rockfish are also taken on lures, especially metal jigs. Diamond hex bar jigs and Tady, Salsa and SeaStrike metal yo-yo type jigs are all producers. Jigs in the 4-6 ounce range will work in shallow water, or even up to 200feet of water when the boat drift speed is slow.

The Northern California trend to lighten fishing tackle is apparent in rockfishing. Depending on wind and current conditions, water depth and rockfish species, anglers are taking fish on freshwater spinning tackle, black bass tackle and even on ultralight rigs. It makes rockfishing much more challenging and exciting. And it surely beats cranking up a two or three pound weight and several bucketmouth rockfish from a depth of 300 feet or more.

Best light tackle opportunities occur in water that is 30-120 feet in depth. Light wind and current is also desirable because then less weight is needed to take the offering down to the fish. And with less weight, you can use lighter tackle and line. One approach is to use this lighter tackle with a rock cod rig or shrimp fly rig. Casting out one or two ounce jigs in the direction of the drift is also a good approach.

If your main line is less than 10 pound test, consider using about a 10 pound, 2 foot leader. If the jig stops sinking, put the reel in gear and set the hook. If there is no hit, retrieve in short, quick hops by pumping the rod tip, or jig it up and down near the bottom. Bucktail jigs and soft plastic lead-head jigs work well. at times, you can fish suspended rockfish in shallow water. Yellow rockfish are the most likely candidates. It’s great fun to cast to these 2-5 pound fighters.

Where to Catch Rockfish

Some of the best shallow water opportunities are in Monterey Bay off Santa Cruz and Capitola, north from there along the coast in kelp beds and over reefs, and at the Farallon Islands.

How to Cook Rockfish

There are almost 50 varieties of rockfish along our coast. Commercially caught rockfish are most often sold in fish markets as snapper. All varieties are almost always filleted. Since most varieties of rockfish have very large heads, the yield of fillets can be as low as 20-30% of fish weight. Rockfish meat is lean, has low fat content and is mild tasting. These fillets lend themselves to the cooking method of choice including sauteing, broiling, poaching, frying or baking.

The Fishing Advice is your no-nonsense, fishing news and information website. We deliver the definitive fishing material straight from the experts.
Contact us: [email protected]
© The Fishing Advice 2021. All Rights Reserved.
MORE STORIES
How To