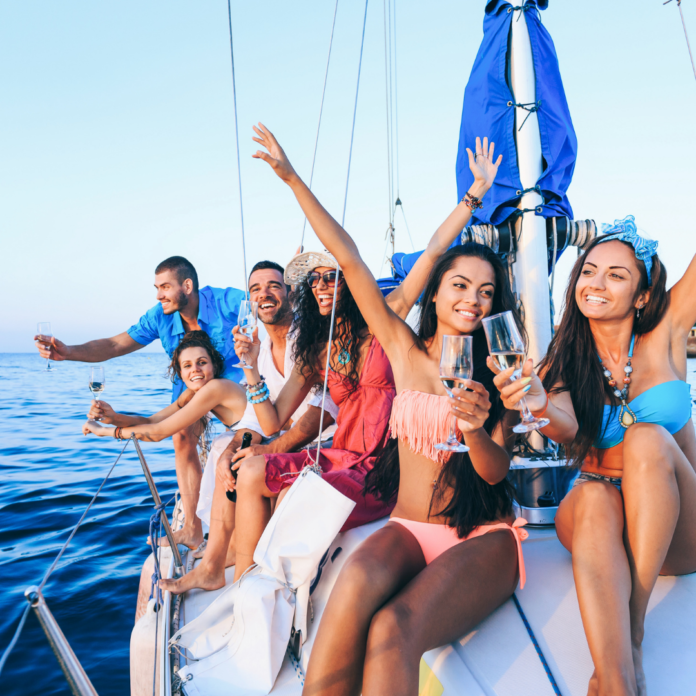 It’s still in the low 90s at 5 P.M. when I board a Gateway Clipper riverboat near the convention center. There’s a crowd of people on the boat, and they include many representatives of BASS (the former acronym and current name of Bass Anglers Sportsman Society), some representatives of ESPN, most if not all of the BASS State Federation presidents and their wives, local political and corporate dignitaries, many people from the event’s sponsoring companies, and even the president of ABC Sports, George Bodenheimer. A pop band with a singer is entertaining the crowd.

There are also many of the Bassmasters Classics forty-seven competitors and spouses or friends here. The tournament does not start until Friday, but the anglers’ only day of current practice (they had a practice period a month earlier) is tomorrow. Shouldn’t they be resting, drinking carrot juice, poring over maps in their hotel rooms, and communing with the fishing gods instead of munching cocktail franks and drinking beer?

A lot of the people seem to know one another. A group of eleven are all wearing the same T-shirts. In some corners there is so much laughing and hugging that I’m wondering whether the Citgo Bassmasters Classics is like an annual party for most of them. And its 2005. It’s kind of how I remember the media, some pros, and some sponsors behaving at the Classic in the early 1980s. Very party-like. Except that there are hardly any members of the media on this boat.

The riverboat from the Clipper fleet cruises around the Point, and the blonde is still sunbathing at the pool. Around the corner is a small barge with a bright-white tarpaulinlike top that says “Cabela’s” in gold lettering. This is a clever—and probably cheap—bit of in-your face guerrilla marketing by this giant retail and mail-order marketer of outdoor goods, particularly since one of the big-bucks sponsors of the Classic is its competitor Bass Pro Shops, and a smaller retail competitor, Dick’s Sporting Goods, is headquartered here in Pittsburgh.

The riverboat heads up the Monongahela, locally called the Mon. Many visitors are having trouble pronouncing the name of this river, which is said to have meant “river of falling banks” in the Delaware Indian language. When I observe the shoreline, it’s obvious that there are few places to get close to the river from the land and a paucity of public access points. Most surprisingly, on what will likely be one of the hottest days of the summer in Pittsburgh, there are very few people boating on the river. A couple of near-shore kayakers, three personal watercraft users, and a ski boat.

Up on the top deck I meet Jim Motznik, a city councilman representing a district with forty thousand people. He does not fish and confesses that he had no idea what the Citgo Bassmaster Classic was when it was first broached, but he’s very happy with what’s happening and expresses sentiments that will be echoed many times in later days.

“We’re projecting a positive image,” he says. “Showing that we’ve cleaned up the rivers. And creating economic development for the future, generating interest around the country.”

He walks off to pump some hands. I’m beginning to see a theme.

It’s not about the fishing.

The riverboat pulls into the dock at Sandcastle Waterpark, a complex of water slides and wave pools built in 1989 on the site of a steel mill railroad yard, and the first modern-day use of abandoned steel mill property for recreation. Perhaps not coincidentally, Sandcastle is owned by Kennywood Entertainment, which also owns America’s oldest theme park, Lake Compounce, located in Bristol, Connecticut, where ESPN is headquartered.

Everyone disembarks cheerfully, although trouble is brewing downriver where the sky is getting progressively blacker. About the time that everyone has made it through the buffet line at the Sandbar Restaurant, there’s a brisk wind and rumbling in the sky. Heavy clouds are moving toward us.

Out on the river, a ski boat races up and heads into the Sandcastle dock. Several twentyish people quickly disembark and head up to the main courtyard. None too soon, in fact, as torrential rain pours out of the sky for nearly twenty minutes. It should be more than enough to put orange flags on the overflow pipes.

Dale Bowman, the outdoor editor of the Chicago Sun Times, and I have sought refuge under the back canopy of the courtyard bar. In the middle of the rain, the driver of the ski boat comes to the bar with one of his friends. Both are in bathing suits, and neither has a shirt on. They are each treated to a free drink and food, as they have essentially crashed a closed party, and they seem bemused by their good fortune.

After getting a drink at the bar, the boat driver turns toward a fellow in front of me and asks what’s going on. A party for people who are here for the Citgo Bassmasters Classics, he’s told.

He looks surprised, his eyebrows lifting a bit, and in a priceless few words sums up what turns out to be a fairly uniform sentiment for Pittsburghers who do not fish, know little about what’s under the surface of their rivers, and have it ingrained in their heads that this is still a smoky steel town.