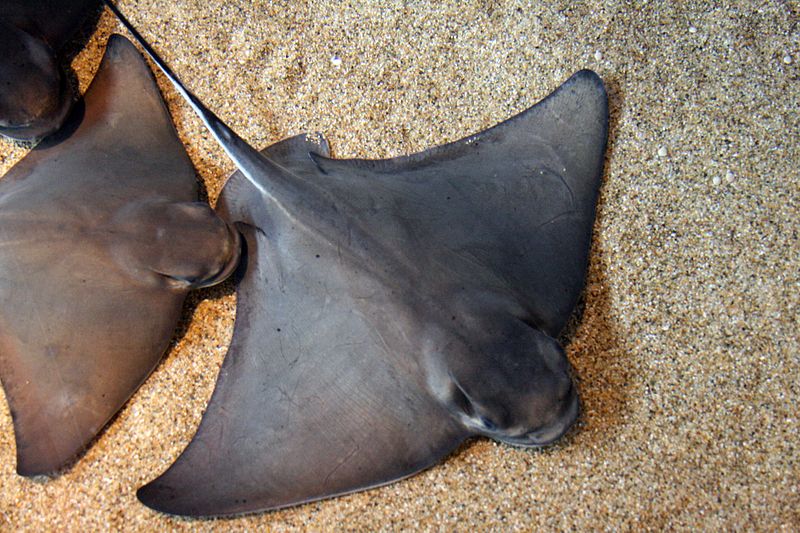 Fishing for batrays is an overlooked sport fishing challenge that will put even the toughest saltwater fishing tackle to the test. Batray is big and strong. It’s not unusual to hook into 60 to 100 pound fish. And their powerful wings, actually fins, give them an inordinate amount of pull or leverage.

Batray is often found in the open oceans at depths to 150 feet, but most anglers prefer to pursue them in shallower waters like San Fransisco Bay, Humboldt Bay and Elkhorn Slough near Moss Landing. In bays and sloughs they feed heavily on clams, oysters, shrimp and crabs.

Batrays are not considered good eating, which in some respects is probably an advantage. Why bring these flapping, angry guys into the boat if you don’t have to? If your skilled and lucky enough to win the fight with a big ray, just release it at the side of the boat.

The largest recorded catch in California weighed in at a whopping 181 pounds and measured 4 feet 9 inches across.

During most of the year, batray are scattered. But in early summer, often in May, they congregate to spawn. then larger numbers congregate, usually at high tide along shorelines. Boat boat and shore anglers have a shot at them. Bait fished right on the shallow bottom is the method of choice.

Fish the incoming water up to high tide. Since Batray are nocturnal feeders, tides corresponding with dusk or dawn, or even dark if local regulations permit, are probably the best.

Hooking rays in water 2 to 4 feet deep is common. Cast your baited rig out as far as from the boat or shore as possible, then set a taut line with a loose or free drag and with the reel clicker on. A screaming clicker means it’s time to set the hook on the ray as it flees towards deeper water. Often this run will strip a reel bare and smoke the drag.

Medium to heavy saltwater tackle is in order. Equipment used for open ocean rockfishing or cannonball-type salmon trolling will work just fine. See the Rockfish and Salmon post for specifics. You’ll need at least 20 pound monofilament and 5/0 hooks. Flatten the barb on the hook to make releasing the batray easier. By the way, if you can’t easily remove the hook, just cut the leader to let these bug rascals go. The hooks will dissolve.

Slide the sinker up the line and then tie on a snap swivel to which you can attack a snelled hook. A very effective bait is frozen whole squid. Boxes are sold at most grocery stores. Some anglers use more exotic bait like chicken parts.

When and Where to Fish

In San Fransisco Bay, the far south end is probably the best bet. Elkhorn Slough, a Monterey Bay estuary at Moss Landing, is a big batray hangout. A popular ray and shark tournament is held there each year. Humboldt Bay also has an abundance of Batrays.

Peak fishing occurs in early summer during spawning on tidal flats. To reiterate: do release these cow-eyed giants so they can continue to cruise the bottoms and provide fishing pleasure to future anglers.