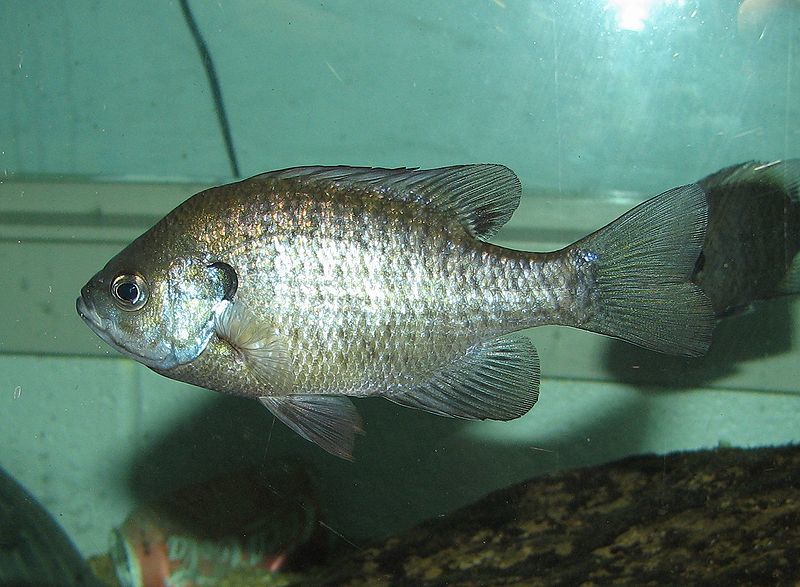 Bluegills are the most abundant panfish in California waters. They’re virtually in all warm water lakes in Northern California. They were introduced into California in 1908 from Illinois. These fish are fun to catch and are very enjoyable eating. An in many locations they are abundant, so there is no need to feel guilty about taken them.

They reproduce with great success, and heavy populations can crowd out large sport fish and stunt bluegills growth. Bluegill angling is easy and relaxing fishing. And it is especially enjoyable for youngsters. Give them a rod and reel, a can of worms and a little dock, and they’re set for hours of fun and adventure.

Redear sunfish are California’s bigger and better, modern day bluegill. When nature shaped the landscape of California, warm water lake and stream habitats, and the fishes occupied the, were limited. Only the Sacramento perch, tule perch and a number of minnow and sucker species were found in warmer sections of streams and the few permanent lakes that existed prior to 1870.

Redear sunfish are native to waters in the southern United States, Rio Grande and Mississippi River. But they were observed in the lower Colorado River, in Southern California, in 1940. They’ve since been stocked in Northern California lakes and reservoirs because they outperform the old standby bluegill.

While not as plentiful as bluegills, which they resemble and with which they often hybridize, redear are highly regarded by Northern California anglers because they usually grow faster and larger than bluegills. The listed California record redear is 3 pounds 7 ounces.

Fish in the 1/2 to 3/4 pound range are not uncommon. They can be distinguished from other panfish by their bright orange-red margin on the tip of each gill cover, a more slender body than the bluegill, and a typical greenish color blending to pale yellow on the lower body and abdomen.

How to Catch Bluegill and Redear Sunfish / Best Techniques

The easiest time to find bluegills is when they spawn in shallow water in the spring (March-May). They’ll be in 4-6 feet of water over sand or gravel bottoms. Be careful not to spook them if the water is clear. In summer bluegills behave like bass, moving to submerged channels, under docks, over bars, to weed beds or drop-offs.

It’s at these times that it may be necessary to fish 10-20 feet down. A drifting, rowed or trolled boat with baits suspended at various depths can often find them. Bluegills are always in schools, so when you find one, you’ve found a bunch. Any type of fishing tackle (spinning, spin casting, bait casting, cane pole) is fine.

This is probably the most popular approach, especially for kids. Some of the best baits are red worms, meal worms, crickets, chunks of nightcrawlers and small grasshoppers. Commercial dough-type baits also work. A bobber is most often used to keep the bait off the bottom and to signal a bite. From shore you can use a bobber rig.

From a boat or dock you can use the same bobber rig or take the bobber off and fish straight below the pole or rod tip.

Still fishing, or bait fishing for bluegills, might be somewhat of a misnomer. Most experts agree that a slight movement of your bait is desirable. With any rig, flick the rod tip frequently to move your bait. Another principle is to change depths if action is slow. Frequently, large bluegills are down deeper than most bobber anglers suspect.

Fly casting for bluegills is enjoyable and productive. A medium action, 7 1/2 to 8 1/2 foot rod is suggested, but any will do. A wide variety of offerings will produce depending on the lake, the time of the year and the time of day:

A casting bobber is a small bobber, usually made of clear plastic, that is attached to monofilament line. Because of its weight, (some allow you to let in water to make it even heavier) it allows anglers to cast poppers, flies, etc., using spinning, spin casting or bait casting equipment. So you can enjoy “fly fishing” without having to use a fly rod and reel.

Bluegills can be found in just about any waters holding bass or other warm water species. Bullards Bar is known for its large bluegill. Clear Lake is a good place for bank anglers because of abundant docks and brush. Top producers for redear sunfish are Indian Valley, Lake Sonoma, Amador, Stony Gorge, East Park, Folsom, Black Butte, Pardee, Oroville and Collins.

Since bluegills are small most people clean them in the traditional way. Scale them by rubbing a knife or scaling tool from the tail of the fish towards the head. Next, cut open the belly, starting from the anus, and remove the guts. Finally, cut off the head. Rinse them off and they’re ready for the pan.

An alternative is to fillet them, especially for redear sunfish. This yields small fillets and eliminates skin and bones in the cooked fish. See instructions on filleting in the Fish Cleaning Section. Sauteing the whole fish or individual fillets is most popular. See the crappie section for an excellent recipe.