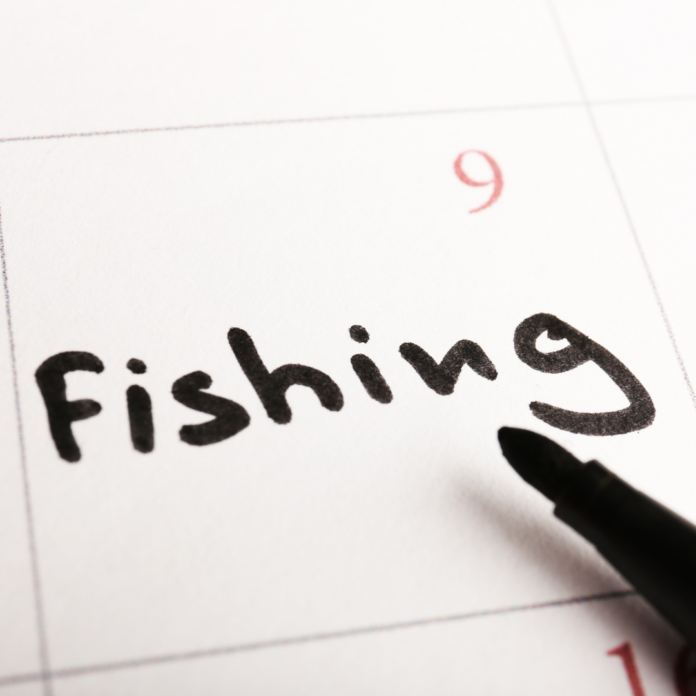 Bait dropper (Fishing Words) A little cage filled with bait – say, maggots or chopped worms – that is attached to the line and then lowered into the water where you’re fishing. As it hits the bottom, the cage opens and releases the bait. Also sometimes refers to a clumsy angler.

Baiting needle Used for poking holes through bait in order to thread line through them. Also used for baiting fellow anglers when you get bored (which is quite often).

Beat What game fishermen call a swim – a spot in which to fish.

Bite alarm Fiendish electronic device designed to rouse an angler from deepest sleep or beer-induced coma; indicates a fish is making off with the bait.

Bivvy Small, domed tent used to ward off the weather during long fishing sessions, during which time its character changes to reflect that of the occupant; some anglers keep everything shipshape and Bristol fashion, while others initiate a dirty protest almost immediately.

Blank When you go fishing and don’t catch anything. Also, the look on an angler’s face when you ask the question: ‘Caught anything?’

Boilies Artificial baits stuffed with flavour enhancers and attractants, originally intended to catch carp but now used for many fish; high fat and protein content said to be responsible for the large bellies seen on modern fish. Anglers should not snack on these while waiting for a bite but, from the looks of their own bellies, many of them do.

Coarse fishing ’Cos you is common, innit? (Alternatively, ‘Are you one of those frightful plebs who only fishes still water?’)

Commercial fishery Not a lake that has advertising billboards round the edges (though God knows that can’t be far away) but one that’s managed and stocked regularly with fast-growing fish (known as ‘stockies’).

Day ticket Unlike Willy Wonka’s ticket, this does not allow you entry to a land of chocolate wonder – rather, to a fishery that may or may not contain fish.

Disgorger A thin metal or plastic tool for removing a hook from deep in the mouth of a fish. Also, what a sea angler does during a force 10.

End tackle The stuff that goes at the end of the line, nearest the fish. May include one or more hooks, weights, a single larger weight, swivels, plastic stoppers, a float and so on. Always invites a double entendre.

F1 Cross between crucian and common carp, bred especially for commercial fisheries because they don’t grow too big, feed all year round and are highly resistant to disease. Nothing to do with tedious motor sport.

Float fishing (Fishing Words) Popular style of angling where the end tackle and bait are suspended beneath a float which stands upright in the water; when a fish takes the bait it bobs, then disappears, affording the angler a sensation of something close to a state of absolute bliss.

Game fishing Because you need to be game to spend all that money without catching anything.

Gozzers Home-bred maggots which are larger and whiter than shop-bought ones. Best method is to get a pig’s or lamb’s heart from the butcher and leave it in a dark, moist place for a week or so. It doesn’t bear thinking about.

Hairy Mary One of many evocative names for fishing flies. Others include the Flaming Booby and the Fly Formerly Known as Prince.

Ledgering (Fishing Words) Style of fishing where the angler uses a weight to cast and keep the bait on the bottom. Bites are usually indicated when the tip of the rod taps or tugs round or when an electronic bite alarm sounds. Not exactly riveting.

Licence fee If you fish in England, you need one of these; watch out for the Fishing Licence detector vans if you haven’t bought one.

Lough/loch/lake Irish/Scottish/English name for a large body of still water. The style of fishing most anglers prefer.

Lugworm Unpleasant-looking worm used for sea fishing. The further away from you, the better.

Lure Anything designed to look like a little fish and attract the attentions of a bigger, predatory fish. What tackle dealers do to get anglers into their shops with assurances of free local advice about what to fish, where.

Mark What sea anglers call a swim. What tackle dealers call a customer.

Marrow spoon Long, thin, pen-like instrument for removing the contents of a trout’s stomach to see what it’s been eating. Not for the squeamish.

Permit Written permission to fish in a particular spot on a particular day. Also aggressive pack fish that live in shallow, tropical waters.

PETA People for the Ethical Treatment of Animals. US-based pressure group which doesn’t much like angling and anglers, or anything to do with hunting, shooting or people who wear fur. If it could just focus on where the real cruelty lies, like animal transportation and slaughter, they might persuade a few million fishermen to join up.

Pinkies The larvae of the greenfly; fish are very partial to these. (Not to be confused with hairless, newborn mice which are fed to pet lizards and snakes. Fish with those and you really will have PETA after you.)

Playing a fish Most people can’t get an actual tune out of a fish, so instead use this phrase to describe the process of extracting the fish from its watery lair.

Poppers (Fishing Words) A type of lure designed to mimic a small fish thrashing on the surface and not what you were thinking at all.

PVA bag Substance called polyvinyl alcohol which can be made into little bags which dissolve on contact with water. Fill these full of bait, tie near the hook, cast out; PVA disappears, leaving mound of tasty morsels to attract passing fish.

Ragworm Unpleasant-looking worm used for sea fishing that also has – oh, joy – pincers that can give the unwary angler a nasty nip.

Scale-perfect Used to describe a fish that looks like it’s never been caught. Substitute with ‘pristine’ or ‘untouched’.

Shot Small weights that look like tiny Pacmen which are pinched onto the line to keep bait on the bottom, balance a float and so on.

Spinning Style of fishing which involves casting and then retrieving a lure in such a way as to make it look like a sickly fish in order to attract larger, hungry fish after an easy meal.

Stickbait A lure that looks like a stick. Don’t ask why fish find these interesting.

Striking The act of lifting the rod to set the hook in a fish when you’ve had a bite.

Syndicate If we told you, we’d have to kill you.