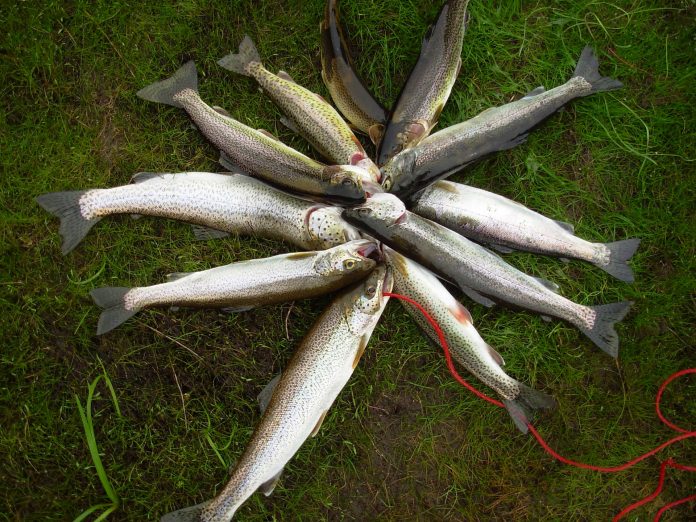 For many years, people believed brown trout and sea trout to be separate species. This is understandable because the two are so dramatically dissimilar in both appearance and habit.

In fact the sea trout is simply a migratory brown trout which having been born and reared in a river, goes to sea when it is two or three years old. The sea trout then spends the greater part of its adult life at sea returning to the river of its birth only to spawn.

It is during the sea trout’s spawning run that the fly fisher goes in pursuit of it.

Although most of our chalk streams do have runs of sea trout, the spate rivers tend to have much better ones. Note that it is generally true that the less fertile a river is the better is its run of sea trout.

This is because over many hundreds of generations brown trout in unfertile, relatively food less waters have been under greater pressure to seek new pastures. In doing so some of them have therefore adopted a migratory habit.

The first time they return to fresh water from the sea, usually weighing between 1/2 pound and 1 pound, the sea trout tend to move in shoals arriving between mid-June and late September.

These first-run fish are known by an assortment of colloquial names — peal or school peal in Devon, herling and finnock in Scotland. Their older brothers and sisters quite commonly weighing five or six pounds and sometimes very much more, arrive in the rivers in two runs. A generally light spring one usually starts in April or May and going on into July.

The second one and an often heavier autumn one in September and October.

Sea trout can vary considerably in appearance. Some are virtually indistinguishable from non-migratory brown trout, having the same bronze or golden flanks and the same largish, lightly haloed black spots.

Others — brilliantly silver and often with neat little black ‘x’ marks on their flanks — look more like salmon. They all present the fly fisher with an intriguing conundrum.

It is wholly provable and widely acknowledged that sea trout are indifferent to food in fresh water once they have been to sea. This is hardly surprising since so many of the rivers up which they run are so very barren.

Rarely is anything found in their stomachs when they are caught. But they can be fished for and taken on exactly the same fly patterns we use for brown trout — specifically imitative ones, as well as the more commonly used traditional or attractor patterns.

There can be few competent flyfishers who regularly go in pursuit of brown trout in streams and rivers in the West Country, in Wales or in Scotland who have not taken occasional sea trout on small dry flies.

The most significant characteristic of the sea trout from the angler’s point of view — apart, perhaps, from its spectacular fight and its superb culinary qualities — is its shyness.

Sea trout are infinitely more easily alarmed than brown trout are and this militates in favour of fishing for them chiefly by night.