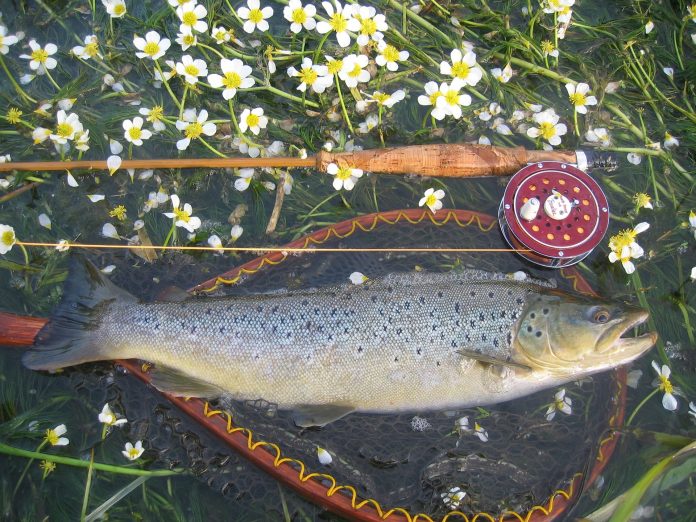 If the sea trout presents us with a conundrum, the grayling — the lady of the stream — is an enigma. Although quite unlike a trout in appearance and breeding habits, she wears the salmonid badge in the form of that small, tell-tale adipose fin on her back between dorsal fin and tail. Her diet is exactly the same as the trout’s.

Grayling are rather more critical of water quality than brown trout are, and show a marked preference for cold, very clean, well oxygenated streams and rivers with plenty of deep, dark pools. Although they may be found in most parts of Great Britain, they do not occur in Ireland.

On the mainland, they do best in the chalk streams and in spate rivers in Yorkshire, in the north country and in Scotland. (In north-west Europe — especially in Austria, Sweden, Finland and Norway — grayling fare noticeably better than they do here, and grow very much larger. In Britain, a two-pounder is a fine specimen and a three-pounder is exceptional.)

The grayling fish is a pretty and intriguing fish to look at. With her flat belly and gently arched back, she is beautifully streamlined — far more obviously so than the trout. Her markings — light grey or bronze on top blending to bright silver flanks lined laterally with black.

She also has a white belly — are much like those of many coarse fish, as are her scales, which are noticeably larger than a trout’s. But her single, most obvious distinguishing feature is her dorsal fin, huge, orange, barred and sail-like.

She uses this to advantage when hooked — putting it up and ‘paravaning’ across the current — and which, apparently endearingly, but in fact for purely practical reasons, the male folds over his mate’s back during spawning.

The grayling’s eye is interesting, too, with its strangely pear-shaped pupil which almost certainly serves to enhance her forward binocular vision.

The grayling fish is essentially a bottom feeder. This is evidenced by the fact that her mouth is on the small side and low-set, rather than being right at the front of her head as the trout’s is. This probably accounts for the way in which she takes an insect from the water’s surface.

She rises from the bottom increasingly steeply until she is almost lying on her back, and then turning sharply downwards having grabbed the fly — or, quite often, missed it. This is wholly different from the trout’s gentle upward tilt from a position quite close to the surface, his confident taking of his quarry and his leisurely downward turn.

Unlike brown trout, grayling spawn in the spring with the coarse fish and, as a consequence, tend not to regain peak condition until the late summer. They are at their best during the autumn and winter.

They are prolific creatures, producing vast numbers of young which must be culled if any of them are to grow to respectable sizes and if they are not to encroach too heavily upon the trouts’ food supplies. It is their prolific nature and the fact that their diets are so similar to the trout’s that have brought about the contempt with which some anglers have regarded them and the wars that some keepers have waged on them.

The Grayling Fish as a Sporting Fish

But, if their numbers are kept within reasonable bounds, grayling are fine sporting fish and, in recent years, flyfishers have come to recognize this and to value the extension to the season they provide.