There is an old saying that goes 10 percent of the fishermen catch 90 percent of the fish. This may be somewhat overstated in terms of sheer numbers since it does not take a rocket scientist to catch regularly stocked, planter-size rainbows; however, when it comes to fooling larger, quality trout, this adage may indeed be fairly accurate. Nevertheless, we bring to to you the best trout fishing tips from the trophy hunters themselves.

As with any type of fishing — fresh and saltwater alike — there is a small group of “hard core” aficionados who put a lot of time in on the water in pursuit of their favorite gamefish. This certainly holds true for the growing legion of California trouters who pound these waters year around in search of large, trophy fish.

These anglers have devised certain little “tricks“, so to speak, that they utilize to not only catch larger trout — but more fish than the average recreational fisherman. As has been mentioned, competition and angling pressure on our California waters is immense at times, especially on weekends. Here are some of the finer points of this sport which may provide you with even more productive days in the future.

There is an elite band of trout fishermen in California that are primarily committed to one endeavor: searching for trophy, world class. brown trout. These men put tremendous time in on the water pursuing both line class and all time record browns. They fish in some of the most inclement weather and pride themselves on being “first on” and “last off” the lake. 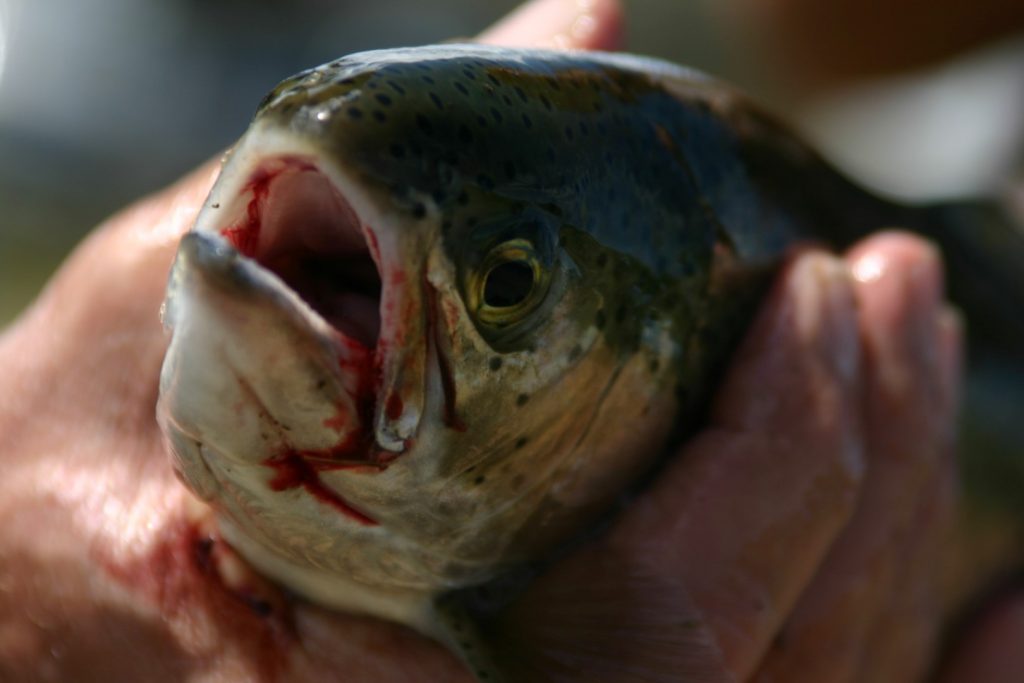 Bob Bringhurst and Jon Minami are two of these California “hawg hunters” with impressive credentials. Bringhurst was the former all-tackle world record holder for the brown trout category with an incredible 33 pound, 10 ounce behemoth!

Minami is the previous California state record holder with a 26 pound, 5 ounce brown. Both of these men have spent hundred of hours on California’s trophy lakes such as Bridgeport, Lower Twin, and Crowley in quest of these lunker fish. Each is recognized as a true expert on how to catch record-breaking browns. Here are some secret tips they are willing to share with the reader.

To start with, they are very selective as to when to fish for trophy-size browns. They concur that the two best times of the year to look for big browns are at the start of the season or late fall. In early spring, the fish will be actively feeding following the winter thaw.

Their appetites will be voracious with a penchant for large baitfish such as planted rainbows or small Kokanee salmon. Bringhurst and Minami then shy away from these lakes in the summer when vacation crowds and angling pressure increases.

Their interest is rekindled by late October when the bigger browns start to move into the shallows to spawn. Hence, autumn is the other major period in which to concentrate when looking for a trophy fish.

The best time of day to fish for lunker browns is the early morning or late afternoon. Bringhurst notes that he will start in the morning and stop fishing when the shadows leave the water. After a midday rest, he will return to the lake at 3:00 p.m. and begin to work the darker water all the way until dusk.

Minami prefers to fish in the worst, most miserable weather in which he can safely maneuver his boat. He theorizes that big trout are extremely wary. With rain, wind, snow and wave chop, the water conditions become much more turbulent and the fish a lot less hook shy.

Less dedicated trouters will also quickly exit from the lake under such conditions. This leaves the better spots open with virtually no angling pressure. 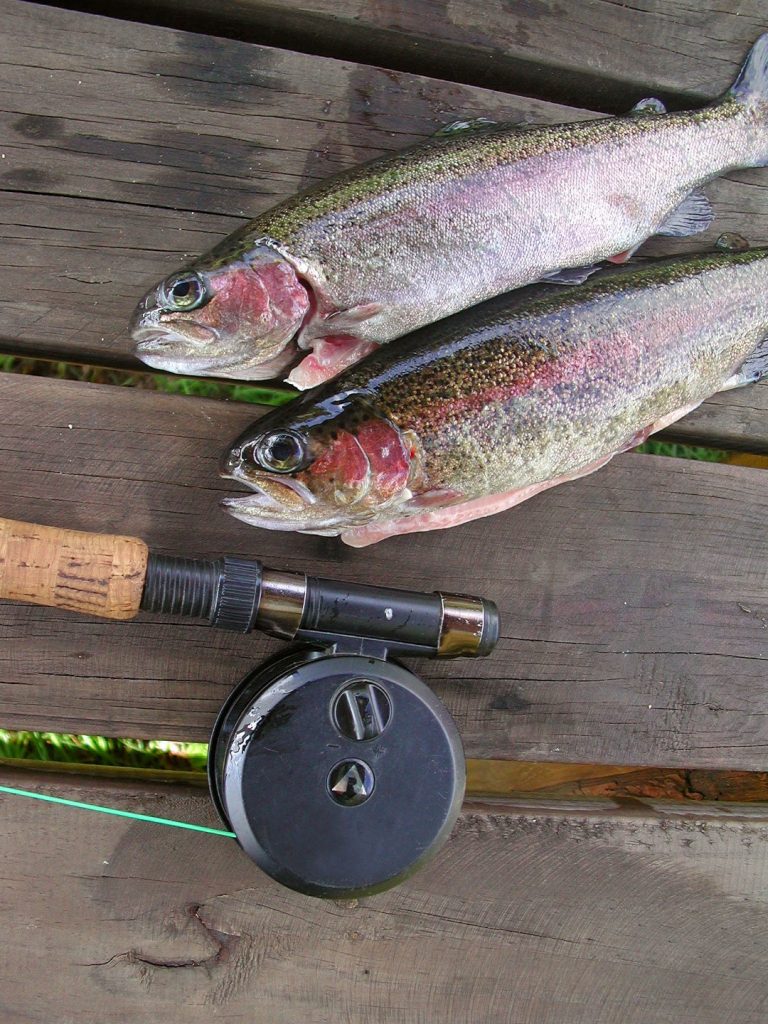 There are some prime areas on these larger bodies of water that will hold big trout. The pros will look for locations that go from deep-to-shallow. Points, ridges, and drop-offs will sustain a lot of forage bait.

Larger browns will move up and down along these areas throughout the season. Spots where the hatchery trucks dump small stocked rainbows can also hold a resident population of big fish. The shallower weedlines in the fall will also harbor chub minnows in some lakes – another preferred food of larger brown trout.

Thus, Bringhurst and Minaai rely upon their electronics to monitor the location of “baitfish” (chubs, shad, planed rainbows, and school Kokanees). This is where the largest specimens in the lake will likely be found. In a sense then, the experts will look for “structure“, preferrably with deep water access that should hold baitfish and in turn attract big browns.

Bringhurst likes to pull a minnow-shaped plug most of the time. The Bomber Model Long-A in gold chub-like finish is one of his favorite choices. When he senses the browns are feasting on kokes or small rainbows, he switches to a larger Rapala minnows in sizes #13 to #18 in rainbow trout pattern.

Minami by contrast, will drag either a magnum size #U-20 Flatfish in a frog finish, or a super long #18 floating Rapala. Using only 8 pound mono, he will troll these baits at sub-surface depths, not much more than 10 to 12 feet.

Occasionally, in rough water, Minami adds a small ounce keel weight to hold the plug down and keep it from planing. With jumbo baits like these, it is also best to use a durable, black interlocking snap, and consider changing to stronger, sharper bronze treble hooks.

Trolling speed can be critical when pulling these extraordinary large baits. The first thing Minami does when he sets out on a lake is to take surface temperature readings. If the water temperature is real cold in the 35 to 40 range, a very slow troll down to as low as 1 1/2 mph will be used to drag the big plugs.

In warmer water, a much faster trod can be employed (5 to 8 mph). It sometimes helps to add a series of twitches or jerks to these big plugs while trolling to present a more tantalizing action.

The pros will also custom color these hefty Rapala minnows. They purchase the stock plug in silver with black back. Next they use a permanent marker and etch a lateral red line. By then adding numerous black dots with another marker, they end up with some very fancy cosmetics, very closely resembling the Kokanee or rainbow forage bait. If the water is very stained, they will make the black dots extra large (about the width of the pen’s tip) to enhance the lure’s visibility.

Only occasionally will Bringhurst and Minami actually threw on boiling surface-feeding fish. This usually occurs with big spawners working the shallows in the fall. Even then they will opt for their favorite lures, the Bomber Long-A or the king-size Rapala minnow.

Here they emphasize that is important not to just toss it out and grind it straight back to the boat. Be somewhat inventive and instill a more dynamic erratic motion to the lure so as to mimic a frantic fleeing rainbow, chub, or Koke.

It will take a very creative and cunning approach to consistent, larger trophy trout from our crowded waters. Jon Minami summarizes it best when he says the major edge he maintains over the recreational weekend trouter is his dedication and perseverance.

Too often the novice angler gives up when weather conditions turn sour or the action slows down. This is when the pros “gut it out” as they say, drawing upon past experiences and using their innovative techniques to make some spectacular catches!