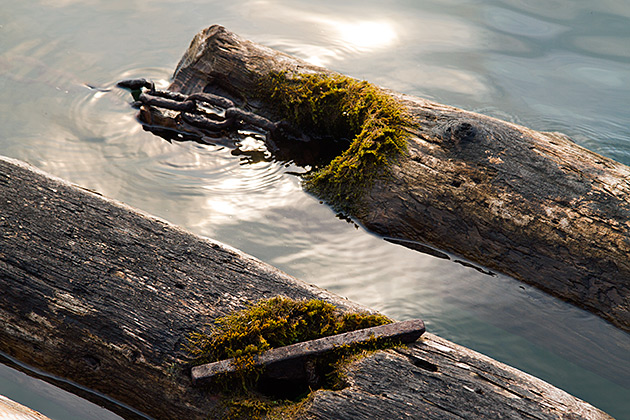 Log fishing in the southwestern Pacific is not a random act. Because of climatological and oceanographic factors, log fishing season begins in July and peaks between September and December.

Trees first wash from riverbanks during rainy season in New Guinea and the Philippines. These are then are carried to the islands by the appropriate, but seasonally shifting, currents.

Modern commercial tuna-fishing operations now mimic the islanders approach. When a log is found to host tuna, a radio beacon is attached to it and its position monitored.

The net is then set around the log near dawn or dusk so that the tuna are less likely to see it and to dive to avoid it.

To natives of small Pacific islands, a floating log was a gift from afar. The wood served as material for building homes and canoes in a part of the world where suitable lumber often was in short supply. Black soil bound in its roots was rinsed with rainwater to remove sea salt.

This was then used to enrich plots where papaya trees were planted. Igneous rocks mixed with the dirt were treasured for toolmaking in a region where the hardest natural objects were seashells and coral rock. But before a floating log was recovered, it often was mined for the fish assemblages that drifted along with it.

For reasons still unknown, many tropical pelagic fish gather, often in large schools, under logs and other floating objects. Even a single palm frond may be a temporary home for schools of dolphin-fish, jacks, oceanic triggerfish, and skipjack tuna.

Single logs have been observed to hold tuna schools of several thousand individuals.

But not all of these fish magnets are created equally. Fishermen from Tobi and the Caroline Islands have found that the longer the log has been in the water, with a consequently greater amount of seaweed and gooseneck barnacles hanging from it, the more fish it attracts.