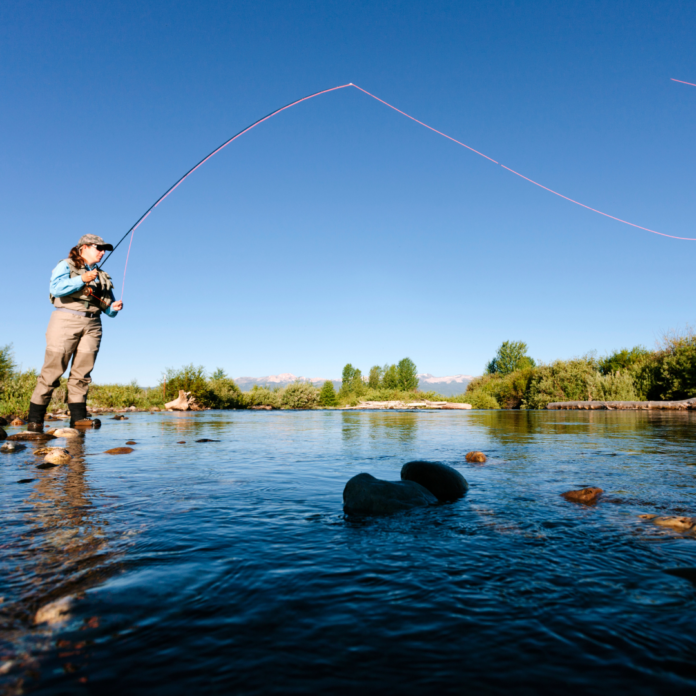 The side cast in fly fishing is more difficult than the overhead cast but very much less likely to frighten fish, especially on clearwater streams.

We saw in the previous post that light passing into water is refracted downwards, the extent to which it bends increasing as its angle of attack on the surface of the water becomes lower.

As a consequence, objects on the bank seen from underwater appear to be shorter and fatter than they actually are, and something like a fishing rod held vertically becomes markedly more obvious than we might suspect — especially when waved back and forth, quite probably flashing in the light. However, if we cast in a horizontal plane, rather than a vertical one, the rod may well disappear below the edge of the fish’s window and, even if it does not, will become far less visible from beneath the water.

The action of the side cast in fly fishing is almost exactly the same as that used for the overhead cast but with the rod held horizontally. The rod is raised slightly on the back cast in order to lift the line, lowered to the horizontal during the pause there and then tapped forward parallel with the ground or water. The two difficulties of the side cast are keeping the line high enough to avoid catching grass and other vegetation behind you, and achieving accuracy.

The solution to the first of these problems is to put a little more energy into the back cast and to angle it slightly upwards, flicking the line high and fast behind you. The answer to the second is less easy and chiefly has to do with practice. A rod moved back and forth in a vertical plane will, inevitably, deliver a line in the direction in which it is pointed, provided that there is no unduly fierce side wind.

However, if a rod is moved to and fro in a horizontal plane, the line — and the fly attached to it — are as likely to swing off to left or right as they are to land where you want them to. We do not believe that side-casting accuracy can be taught through the written word; it is a matter of practice and perseverance. But the effort, if you arc prepared to make it, should be amply rewarded by a significant increase in the number of fish you catch.