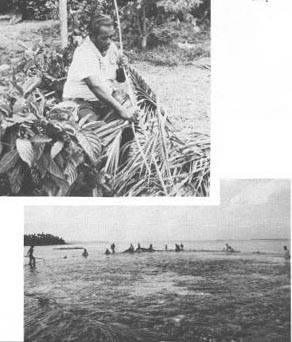 This primitive fish-catching technique, once used throughout Oceania, worked despite its overwhelming lack of sophistication. A leaf sweep is a rope festooned with leaves used to herd and capture fish. Called hukilau in Hawaii and ruul in Palau, the device resembles a giant Christmas tree.

It took the better part of a day for a dozen workers to construct several hundred yards of a leaf sweep by weaving palm fronds around a woody vine or rope. When completed, it was piled onto two bamboo rafts and transported onto a reef flat on a falling tide. The two rafts were pulled apart while paying the sweep into the water, with the rafts moving in opposing arcs to close a circle.

When the enclosure was complete, the fishermen gathered the sweep into a smaller coil. When the corral was only a few meters wide, the crew leader would give the signal to begin spearing the herded fish, which were not forcibly concentrated but simply afraid to cross the unnatural barrier. A certain degree of stealth was necessary – too much commotion and the fish would stampede the sweep.

A more sophisticated version of the sweep is used in the southeast Asia. Fishermen drive fish into nets that resemble giant dustpans by hauling a frightening line toward their mouths. This frightening line is nothing more than a better made leaf sweep.